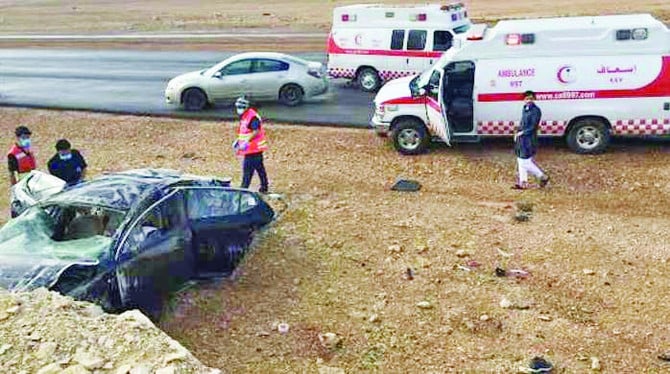 TAIF — In the Taif governorate, which has recently had significant rainfall, 86 car accidents were brought on by rain.

Due to the closure of several traffic lights on Shehar Road as a result of the recent two days’ worth of intense rain in the area, there were numerous traffic accidents and major backups of traffic.

The intersection of Route 60 and Taif-Al-Sail Road had traffic lights that were also closed, and when pressure grew to free up traffic at some of the signals that came after them—roundabouts—it slowed down traffic flow.

Shadi Al-Thubaiti, the Red Crescent’s Taif spokeswoman, reported that 260 emergency calls were handled by the governorate’s Red Crescent team in the first 24 hours following the start of the National Center of Meteorology’s warnings.

He added that there were 86 emergency calls as a result of the traffic accidents, which are classified as emergency accidents.

Additionally, he mentioned that they had 174 complaints of illnesses, including diabetes, seasonal colds, and other illnesses, and emphasized that the patients had gotten the appropriate emergency care.