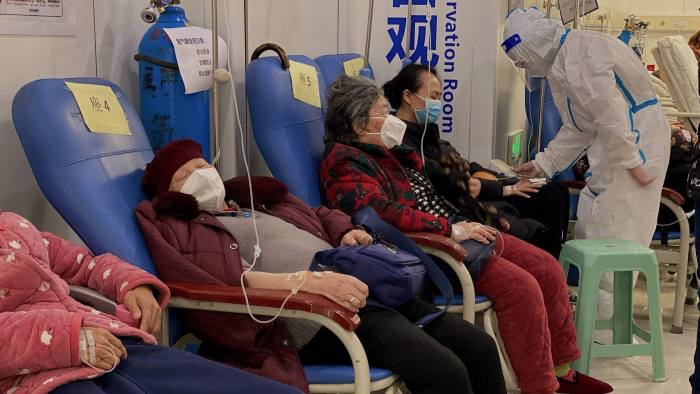 Official reports that a Chinese city is witnessing 500,000 COVID-19 cases every day.

BEIJING: In a rare and swiftly censored admission that the country’s wave of illnesses is not being represented in official data, a top health official said that half a million people in a single Chinese city are suffering COVID-19 every day.

In a startling reversal of its illustrious containment approach, China has swiftly eliminated major components of its zero-COVID-19 strategy this month, eliminating sudden lockdowns, protracted quarantines, and travel restrictions.

Rising infection rates have left pharmacy shelves empty, hospital wards full, and it appears even crematoriums and funeral houses are seeing backlogs as cities across the nation battle to keep up.

While authorities have restricted the medical definition of a COVID-19 death, a move experts have suggested will reduce the number of fatalities due to the virus, the end of tight testing standards has made caseloads practically impossible to track.

The local health head in Qingdao was quoted as saying on Friday that the eastern region was experiencing “between 490,000 and 530,000” new COVID-19 cases every day by a Communist Party-run news site.

According to reports, Bo Tao stated that the coastal city of about 10 million people was “in a time of rapid transmission ahead of an approaching peak” and predicted that the infection rate will increase by a further 10% over the weekend.

Several additional news organizations shared the report, but by Saturday morning it seems to have been changed to remove the case numbers.

The previous day saw 4,103 new domestic infections reported nationwide, according to China’s National Health Commission, but no additional deaths.
Just 31 new domestic cases were formally reported by the authorities in Shandong, the province where Qingdao is situated.

The Chinese government maintains strict control over the nation’s media, with hordes of online censors on hand to remove any anything deemed to be politically sensitive.

The majority of publications produced by the administration understated the severity of the nation’s exodus wave and instead portrayed the change in policy as rational and planned.

Although estimates of actual case numbers are still uncommon, certain media outlets have made references to medicine shortages and hospitals that are under pressure.

In a social media post on Friday, the authorities of eastern Jiangxi province predicted that 80% of its citizens, or around 36 million people, would be sick by March.

In the two weeks prior to Thursday, major medical facilities in the province had admitted more than 18,000 COVID-19 patients, including roughly 500 severe cases but with no fatalities, according to the statement.

Why have COVID-19 deaths risen recently in China? Explained by a MoH official