Sign in
Welcome! Log into your account
Forgot your password? Get help
Password recovery
Recover your password
A password will be e-mailed to you.
Life Of Arabs A complete guide for those who are living in Middle East or planning to come soon.
Advertisement
Home Saudi Arabia Accident & Traffic Violations Seven women died- as family car hits truck in Saudi Arabia 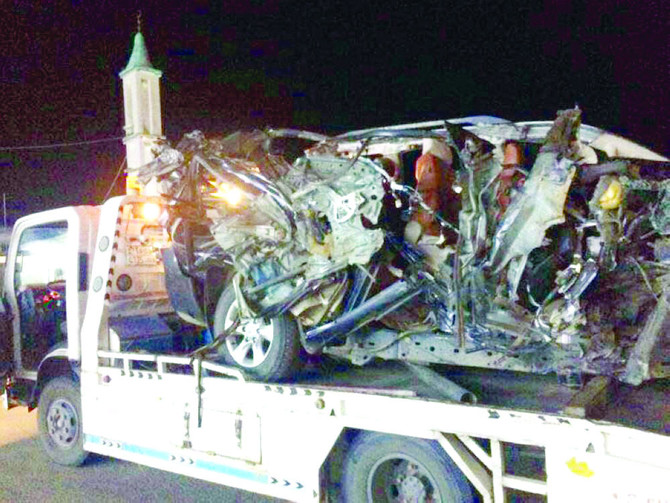 JAZAN-The second family this month to experience several fatalities in a traffic accident occurred on Sawarma Road in the Jazan region, leaving seven ladies dead and five others injured.
Earlier, an accident at the Al-Kadmi Center in Sibia claimed the lives of Sami bin Mohammed Ali Al-wife Nami’s and six sons.
An old man, a lady, and two kids are among the five injured in the most recent collision. According to accident witnesses, the family was en route to a wedding.
The truck’s rear was hit by the car, according to a story in the Okaz daily, and it was being driven without taillights. Near Madaya town, on a one-lane nighttime highway, a truck was towing another truck.

Locals have already petitioned for lighting for the 15 kilometer highway, which they claim is dangerous due to a lack of basic safety features and camels that stray onto the road.
According to Bishi Al-Sarkhi, a Red Crescent spokeswoman in Jazan, the operation room was notified of a family car accident at 8:20 p.m. on Thursday. There were four ambulances on the scene. While the five injured were taken to a local hospital, six bodies were discovered.

Civil Defense in Jazan spokesperson Yahya Al-Qahtani reported that its teams responded to the area and removed the dead and injured from the debris. While the five injured were transported in a Red Crescent ambulance to a local hospital, six persons were pronounced dead at the scene. He stated that a woman passed away at the hospital.
After the incident, inhabitants of Jazan criticized the local traffic police, blaming the lack of year-round lighting on the highway, despite the fact that it connects to several significant cities. They claimed that the common factor in the catastrophes that had happened on this road was trucks.

They charge truck drivers with violating specified schedules, lanes, safety standards, and warning obligations. According to them, there was, and overloading and excessive gross vehicle weights caused the road to be destroyed.