Sign in
Welcome! Log into your account
Forgot your password? Get help
Password recovery
Recover your password
A password will be e-mailed to you.
Life Of Arabs A complete guide for those who are living in Middle East or planning to come soon.
Advertisement
Home General Information Penalties for violations of Saudi Arabia’s Drifting Laws were announced by Moroor. 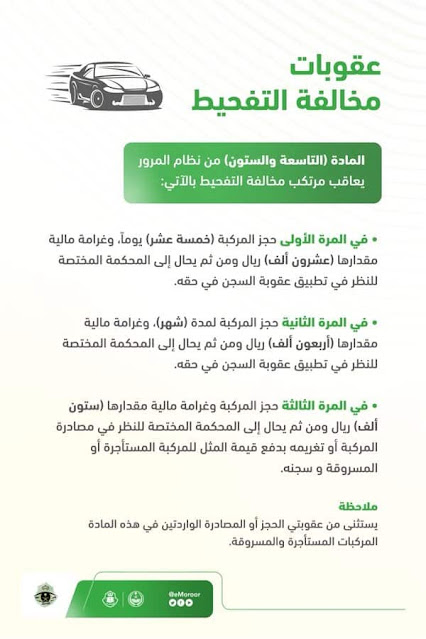 According to Article (69) of the Traffic Law, the General Directorate of Traffic (Moroor) in Saudi Arabia has announced the consequences for drifting violations and the steps to take if the violation is repeated.

Moroor emphasized that rented and stolen vehicles are exempt from the penalties of seizure and that for the first time, the vehicle will be impounded for 15 days in addition to a fine of 20,000 riyals and referred to the appropriate court to consider applying a prison sentence against him.

Saudi Moroor added that repeating the act a third time results in the seizure of the vehicle and a fine of 60,000 riyals. The violator will then be referred to the appropriate court to consider seizure of the vehicle or fined to pay the equivalent value for the rented or stolen vehicle, followed by imprisonment.

The Kingdom of Saudi Arabia’s Traffic Department has confirmed that the two penalties of seizure and confiscation mentioned in this article do not apply to vehicles that have been stolen or rented.