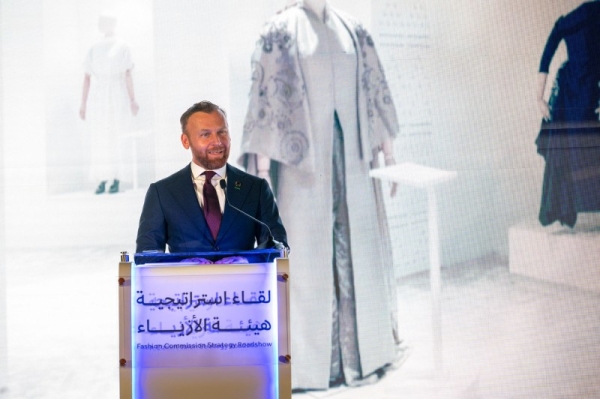 BEIRUT — According to Burak Cakmak, the head of the Kingdom’s Fashion Commission, Saudi Arabia is the only government in the world that has allowed the fashion sector to start from scratch.

On Wednesday in Riyadh, the Fashion Commission announced its plan for expanding the industry there.

Speaking to Saudi Gazette on the sidelines of the occasion, Cakmak stated that after 22 years in the fashion industry, it is an honor for him to lead the commission that will work to develop the industry in the nation.

In order to demonstrate to the rest of the world how the fashion system should operate, Cakmak emphasized that the infrastructure, such as building a research center and developing sustainable methods, is the key priority. The simplest thing, he claimed, was creating a brand.

In response to a question concerning Saudi Fashion Week, Cakmak stated that the first step was to establish a fashion association, a non-profit organization that promotes all local firms and designers, similar to other cities like London, Paris, and New York. The associations of the brands themselves will be in charge of the fashion week.

We would want to see the companies determine what the nation needs and demonstrate to the rest of us—including the government—that they are eager to organize the fashion week.

We are crossing our fingers and daring to support the associations depending on their choice of course of action, and we like to see the fashion associations take the lead, he continued.

He declared that construction on a data hub will begin early in 2019. Information will be given, particularly about the size and development of the market.

There is no doubt that the Abaya is the first thing on everyone’s mind in Saudi Arabia. When questioned about the fashion item that is most in demand in Saudi Arabia, Cakmak said. The dominant outfit until now has been the abaya, he said, but jewelry still holds a significant role in people’s lives.

He said that a cooperation between the commission and King Abdullah University of Science and Technology (KAUST) had been inked in order to establish an outstanding center for materials research. This entails considering the finest materials that have a minimal environmental effect and may be utilized in fashion.

According to Cakmak, this area will assist companies and inventors that are only focused on material research grow their research all the way through prototyping and create materials that can be utilized not just in the fashion industry but also in all other creative areas.

When questioned if there will be fashion runways in the Kingdom with the involvement of the Saudi models who are participating in the international fashion shows, Cakmak emphasized, “We want to see all the aspects of a fashion value change to be present in the kingdom.”

The private sector should take the lead in creating this, he continued, and often agencies collaborate with fashion businesses to do so. “I believe we may anticipate some private sector activities that aim to create businesses that operate in Saudi.”

According to Cakmak, the Ministry of Culture is now offering scholarships for men and women to study fashion at some of the best universities in the world. This will allow Saudi men and women to showcase their country’s creativity to the world while also developing brands that they can then bring back to the Kingdom and use to expand the industry.

Cakmak reaffirmed that they do not consider gender while evaluating innovation. “Creativity has no boundaries, so it’s all about the individual who wants to be at the center,” he remarked.

“Since the majority of women are not involved with fashion, it is amazing given that this is not the case everywhere in the globe. As a result, Saudi Arabia is setting the bar for female designers who run their own firms and serve as creative directors “”This is an example we should be sharing with the rest of the world as well,” he added.