Sign in
Welcome! Log into your account
Forgot your password? Get help
Password recovery
Recover your password
A password will be e-mailed to you.
Life Of Arabs A complete guide for those who are living in Middle East or planning to come soon.
Advertisement
Home Saudi Arabia General Information For international pilgrims in Makkah and Madina, Saudi Airlines introduced the “Baggage... 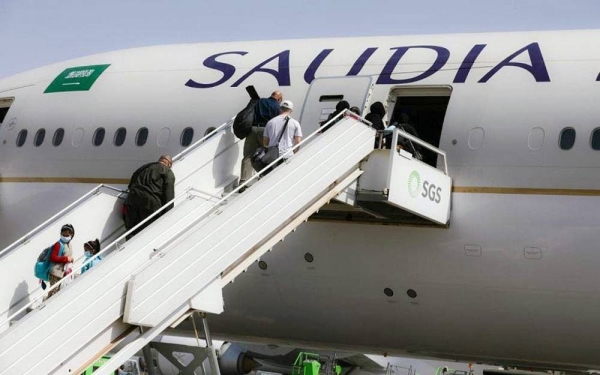 In addition to receiving luggage of groups from their homes in Makkah and Madina, 24 hours prior to their departure flights, Saudi Arabian Airlines (Saudia) announced a new free service that deals with international flights, including the issuance of boarding passes and baggage cards, and completes all procedures related to it before transferring directly to the baggage acceptance at the airport.

Only Saudi Airlines is providing the new service, which was arranged in advance by group representatives who communicated with service providers in Makkah via email (hajjm1@jed-sa.com), Whatsapp (+966515223812), and in Madina via email (hajjS1@jed-sa.com) and Whatsapp (+966515223813). Is it possible to travel outside Saudi Arabia with a vehicle owned by others? Moroor response

As part of its keen interest in the smooth flow of traffic at airports and operations in the return phase after performing the rituals, Saudi Airlines earlier this year launched an awareness campaign related to baggage instructions for pilgrims, its regulations standards, and the campaign conducted in many sites inside and outside Saudi Arabia.

The awareness campaign clarifies all baggage regulations, taking into account the use of an image-supported, streamlined approach. It is also available in six languages at 20 international airports, as well as at various internal locations, such as Hajj campaigns at holy sites and camps, as well as hotels in Makkah and Madina. 6 decisions for the Saudization of several high-caliber professions across several sectors – HR Minister

The ad gave instructions such as not packing any liquids, even Zamzam water, and that the luggage should be well-wrapped and in good shape so that it may be returned without any problems.

Saudi Airlines continues to receive pilgrims at the point of arrival via flights specifically designed to transport pilgrims, which reach numerous destinations and with the assistance of a network of scheduled and additional flights that extend to all regions of the Kingdom and fly to 4 continents worldwide.