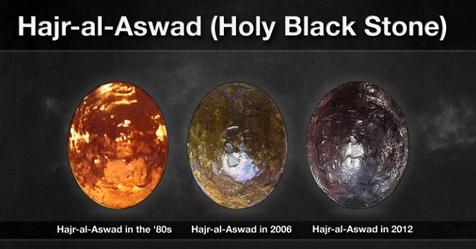 If you look into the history of Hajr e Aswad, you’ll find out that it was stolen and went missing for 23 years. It’s not just any stone that located at the Holy Kaaba’s eastern cornerstone.

Hajr e Aswad is held safe in a frame

When Muslims from all around the world travel to Makkah for Hajj or Umrah, they try to kiss and view it. To avoid being stolen again, Hajr e Aswad is currently kept safe in a silver frame.

It is sacred because it was established by Prophet Ibrahim A.S. and and is blessed from the heavens. It is also known as the Holy Kaaba’s foundation stone. Entry ban on visit visa holders to 4 Saudi airports

The Hajr e Aswad was stolen from Makkah and went missing for 23 years! In January 930, the Qarmatians captured Hajr e Aswad and had it transported to their Hajar base (now Bahrain) by their leader, Abu Tahir al-Qarmati. 1400-year-old Sahabi tree of Prophet Muhammad ﷺ

The Holy Kaaba was attacked

The Qarmatians attacked Makkah on the first day of Hajj with the purpose of stealing Hajr e Aswad. The army of the Qarmatians arrived on horseback and entered Masjid al-Haram. Did Prophet Adam(PBUH) Build the Holy Kaaba First ?

They began violently slaughtering the pilgrims. According to reports, over 30,000 pilgrims were killed while worshiping around the Kaaba.

The Kaaba was looted, buildings were damaged, households were ransacked, slaves were seized, Hajr e Aswad was stolen, and pilgrims’ dead bodies were thrown in the well of Zamzam to despoil it, while others were left on the streets to fester.

According to history, Abu Tahir then stole Hajr e Aswad and kept it for himself. He brought it to Masjid Dirar and had it put there. He desired to make the Masjid a holy site and to move the Hajj from Makkah to Masjid al Dirar. But he was never able to get what he desired! Is there any hadith in Islam about cats?

His body and flesh were eaten away by worms, and he died the most terrible death.

The stone was taken away 23 years later by paying huge ransom money.

To reclaim the black stone, the Abbasids had to pay a large sum of money. During its hostage and removal, the stone was broken into seven pieces.