Sign in
Welcome! Log into your account
Forgot your password? Get help
Password recovery
Recover your password
A password will be e-mailed to you.
Life Of Arabs A complete guide for those who are living in Middle East or planning to come soon.
Advertisement
Home Saudi Arabia Accident & Traffic Violations A family escaped death after a cement block fell from the “Riyadh... 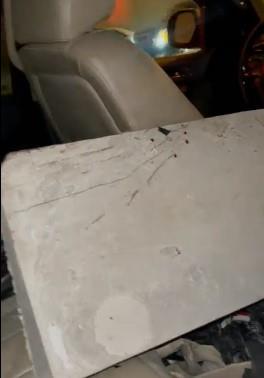 Divine Providence saved a Saudi family from certain death, yesterday evening, Tuesday, after a piece of cement fell from one of the Riyadh train bridges on King Abdullah Road, penetrating the car and causing severe injuries to a woman, her child and her worker.

Turki Al-Asmari, the sister of the victim, told “Akhbar 24” that the accident occurred at 8:20 pm under the tunnel opposite the cabin hall, where the cement block fell on the car of her sister and husband, while they were on the highway, which led to the car stopping immediately, indicating that the accident caused She held them for a while until her sister’s husband was able to come out and ask for help. Entry ban on visit visa holders to 4 Saudi airports

Al-Asmari indicated that the Red Crescent teams began the incident, and her sister and son were transferred to a government hospital, and their ambulance was delayed for about 12 hours, on the pretext that there was crowding and that their condition was not critical, despite the presence of a very deep cut in her sister’s hand, while the child was transferred at our expense to a private hospital. Human Resources clarifies on how to calculate Annual entitlements in Saudi Arabia

She indicated that the worker was sitting in the back seat, and she suffered multiple fractures and was taken to the hospital to receive the necessary treatment, due to the concrete block falling directly on her.

Social media pioneers interacted with the incident, calling for those responsible to be held accountable and to examine all parts of the bridge, in order to avoid further damage to pedestrians.A video makes a fuss about a mouse eating from a “shawarma” skewer prepared for sale in a restaurant in Jeddah Al-Baghdadiyah

LifeOfArabs - February 6, 2023 0
The Saudi Absher platform revealed the steps for "Family Visit Visa Extension," stating that resident individuals can easily use this service online through the...