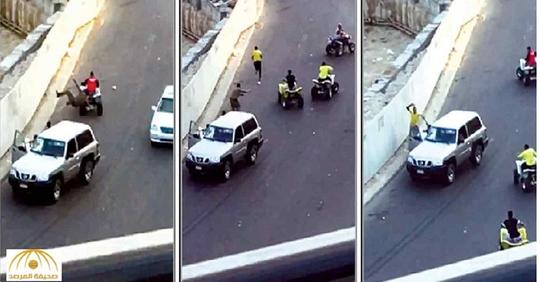 The Attack on Policemen

A gang of buggy riders attacked a police officer in Jeddah on March 9, 2017. A plainclothes police officer had parked his car and was standing just next it when a buggy attacker slammed into him, knocking him down.

He stood up and defended himself against a second attack by a buggy attacker. The gang assaulted the police officer and another man.

As the group roamed around the two, the two continued to save themselves. List of Iqama professions reserved for Saudis

The Punishment of culprits

The attack’s leader will also be punished with lashes. The culprit will receive 1,800 lashes, according to the Saudi court. These lashes will be divided over 18 years, giving each year 100 lashes. Saudi Arabia: Madina Al-Munawarrah First City That launches Fast charging service for Electric cars

Two of the buggy attackers were given 16 years in prison and 100 lashes every year.

The remaining five individuals will be sentenced to five years in prison. Africans account for eight of the nine assailants.

The entire incident is captured in the video below. A woman living in adjoining apartments shot the video. She is a very responsible and sensible citizen.

She not only recorded the entire episode for documentation, but she also called the cops and notified them. The video was utilized as evidence and quickly went popular on social media. A gang of buggy assailants was found guilty by the court.