Sign in
Welcome! Log into your account
Forgot your password? Get help
Password recovery
Recover your password
A password will be e-mailed to you.
Life Of Arabs A complete guide for those who are living in Middle East or planning to come soon.
Advertisement
Home Saudi Arabia Accident & Traffic Violations A tree falls on the car, Najm sets 100% driver mistake 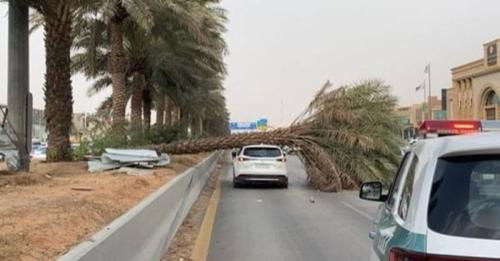 A palm tree fell down on a moving car

Due to strong winds, a date palm tree toppled on a moving car during a sandstorm in Riyadh. The frightening incident was captured on camera by a previous vehicle’s camera lens.

The citizen who was inside the car was fortunate in that he was unharmed. His automobile, on the other hand, was severely damaged. He dialed Najm’s number to file a claim for the car accident. 2 days off, 40 hours a week in the private sector, according to the HR Ministry’s proposal.

They considered Najm entirely liable for the accident once he arrived. He tried to persuade him that the heavy sandstorm was to blame for the date palm tree uprooting and falling over the automobile, but Najm remained unconvinced. On Saturday evening, the Saudi Supreme Court has called on all Muslims in the Kingdom to see the Shawwal crescent.

The incident was later documented on film, which went viral on social media.