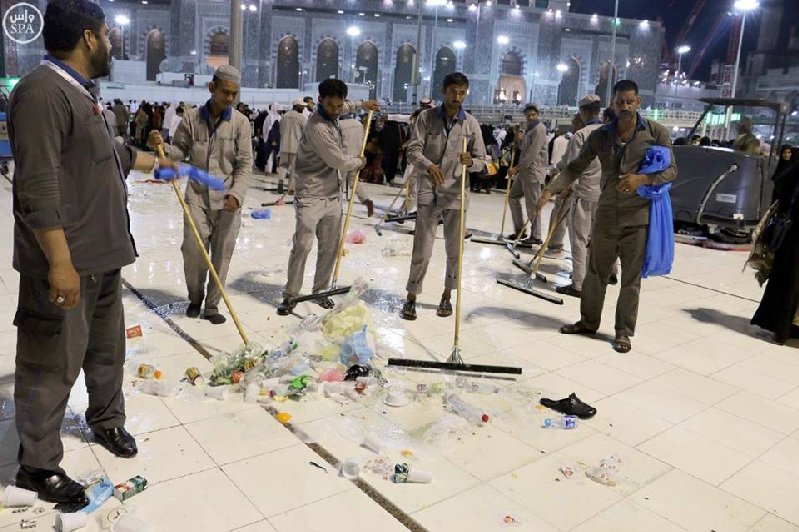 I noticed something remarkable today in Masjid al-Haram while completing Umrah with my mother-in-law. I spotted one of the cleaning personnel in Mataf playing with his cleaning brush during my first round of tawaf.

From afar, I noted his strange behavior, and when I got close enough, I saw him playing with an insect. I can’t say for sure what species it was, but it was a cockroach-sized insect.

What had he been up to?

I slowed down my parent to see what he was trying to accomplish with the small insect. He wasn’t actually touching it with his brush; instead, he was directing it to an isolated area on the second floor of the Mataaf by blocking its path.

It astounded me since I couldn’t comprehend why he was acting in this manner. He could have simply killed it and drained its body into the gutters, but he didn’t. I decided not to bother him and walked on because he was still busy with the little creature.

My mind was torn between asking him why he did it and simply closing the matter in my mind. On my way to the second floor for the second round of Tawaf, I ran across the same guy. He was standing still this time, washing the floor like any other Haram cleaner.

I parked my parent  and approached him with the question, curious to learn the explanation. He gave me a dubious glance for a fraction of a second before smiling.

Read more : “Hajj and Umrah”: the largest share of this year’s Hajj is for those coming from abroad… and there is no exception for any country

Why don’t you go to Masjid al-Haram and exterminate insects?

At Masjid al-Haram, we usually notice two types of insects. We don’t offer insects that are harmful to humans, such as snakes, scorpions, and centipedes, a chance to flee. We’ve been told to shoot them right away because they could endanger the pilgrims in the Haram.

Another group of insects is those that are not immediately hazardous to humans. We don’t kill them for the reasons listed below.

Read more : Following is a List of 7 things that can break your fast