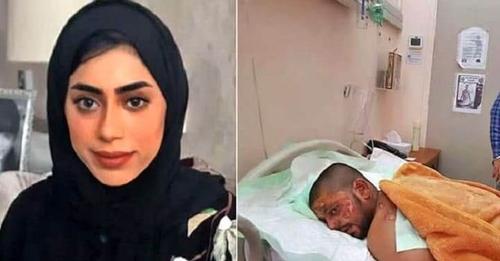 Jawerah Saif Al Kumaiti is a young, brave, and astute woman who saved a driver’s life. She is a 22-year-old Emirati woman who is works at Adnoc and is originally from Ajman.

She went to Ras Al Khaimah’s Sheikh Khalifa Hospital to pay a visit to one of her pals. On her way back, she noticed that there had been an accident there. Although the two trucks had crashed, she was surprised to hear a man shouting for aid. Saudi husband burns his wife to death with acid

She donned an abaya and rapidly devised a plan to save the driver’s life, who was identified as an Indian national. She requested her Abaya from her passenger in the automobile. She snatched her Abaya and dashed towards the man. To put out the fire, the brave lady covered the man with her friend’s Abaya.

The Ambulance arrived: Police, an ambulance, and paramedics arrived shortly after. They promptly administered first aid to the victim before transporting him to the hospital. The young and brave lady praised the police and medical teams’ efficiency in arriving on time and quickly taking action.

Nobody assisted him out, she claims, but she is astounded by individuals who were standing near the driver when he was on fire and called for aid. They did nothing to assist the poor man and instead stood there watching him burn and battle for his life!

Her bravery was recognized: people on social media shared her story, and the brave Emirati woman quickly became a media hero. The RAK police department has recognized her for her fast thinking, bravery, and courage in saving a life. Several news outlets interviewed her.

Ambassador Navdeep Suri, in recognition of her efforts to save the life of an Indian national, congratulated her at the Embassy of India Auditorium in Abu Dhabi. The video is embedded below.

In Lahore, a woman was seen exposing her bikini in public (VIDEO)

LifeOfArabs - January 25, 2023 0
According to project CEO Eng. Mardhi Al-Mansour, the Jeddah Central Project will be officially launched in 2027. Al-Mansour made the announcement during the Future Real...