Sign in
Welcome! Log into your account
Forgot your password? Get help
Password recovery
Recover your password
A password will be e-mailed to you.
Life Of Arabs A complete guide for those who are living in Middle East or planning to come soon.
Advertisement
Home Saudi Arabia General Information With the knife still in his head, an expat made it out... 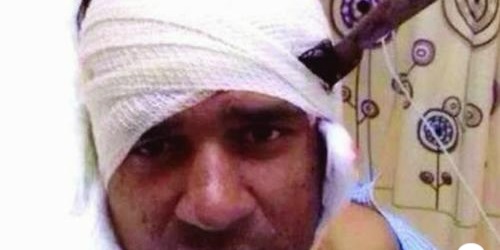 A 24-year-old Saudi attempted to murder an expatriate with a knife. He was able to slam a full knife into the head of a 25-year-old expatriate, but no one can take your life if God is ready to save you.

The picture on this page is of an expatriate who was a victim of a 24-year-old Saudi citizen’s attack, according to Makkah police.

The knife will remain in his head

The Expatriate was carried to the hospital in a timely manner, and the hospital staff treated him with great care in order to preserve his life.

They did not remove the knife from his head since it could have damaged some nerves and resulted in the expatriate’s death. The expatriate is no longer in danger, but the knife remains lodged in his skull.

The Saudi man has been arrested

The Saudi national who stabbed the expat has been apprehended. The Saudis have stated that there was a disagreement between the expatriate and the Saudi.

Doctors believe that they will wait until the expatriate has fully recovered before deciding whether or not to remove the knife from his skull. It is exceedingly risky to pull out the knife because it may result in his death.