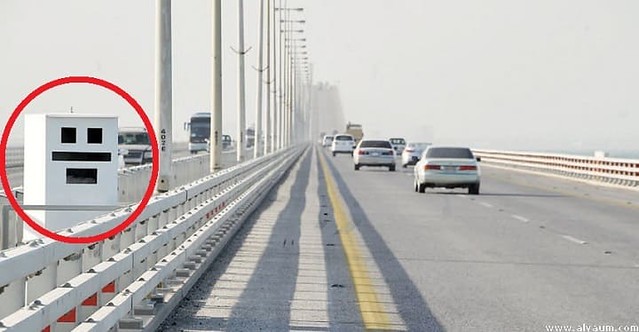 You may have seen that Saher or speed cameras flash once, twice, or even three times. Have you ever wondered what this means?

The single flash of the Saher Camera indicates that you have exceeded the speed limit on the road and that the Saher Camera has taken a photo of your vehicle. For You: 252 New Jobs Update 8th Feburary In Different Regions Of KSA Makkah Jeddah Riyadh Madinah Hail Dammam Jazan

You may have observed that a speed camera flashes twice sometimes. There are two reasons why speed cameras flash twice.

It captured images of two vehicles going by at the same moment. In other words, if you see a double flash of a speed camera, check around to see whether there is another vehicle speeding around you.
Sometimes the camera identifies that the first image it takes is blurry or fails to meet the quality criteria. It takes another image of your car in a fraction of a second in this scenario. Read More: How to extend Visit visa of Wife through Absher in Saudi Arabia

When the Saher Cameras put on the signals detect a traffic violation, they flash three times.

As a result, if you see a triple flash of a Saher camera, you should be concerned since the traffic punishment for crossing a red light is excessively large.

In Saudi Arabia, you will never see a speed camera flashing three times on a car; instead, it will always be a single or double flash.

Is it related to Speed?

Some individuals believe that a minor infraction is committed when a Saher camera flashes once, but a major violation is made when a speed camera flashes twice. It, on the other hand, has nothing to do with reality.

Does a flash always result in Traffic Fine?

It is important to note that a single, double, or even triple flash of the Saher camera does not automatically result in a fine. All of the photographs taken by the Saher camera are subjected to a manual inspection.

If you are convinced that you did not exceed the speed limit but nevertheless received a traffic ticket, you can always use Absher to appeal the ticket.Read More: Expats of 19 countries to benefit from automatic Extension of Iqama, Exit Re-Entry and Visit visa

LifeOfArabs - February 3, 2023 0
JEDDAH -- A mobile phone that caught fire while charging in the Northern Border Region of Saudi Arabia burned a 13-year-old girl. When the mobile...

Pakistan’s former president, has died at the age of 79.