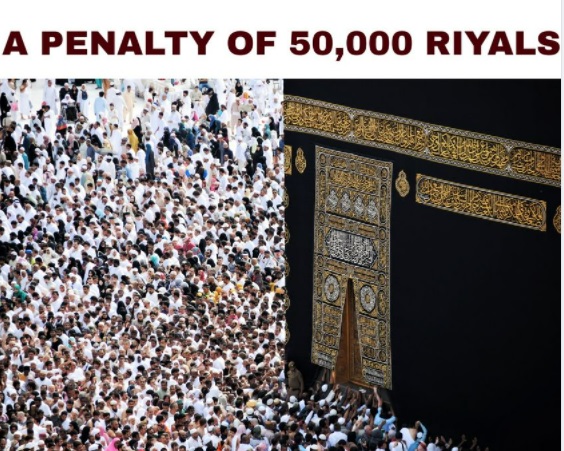 
In Saudi Arabia, the Ministry of Interior (Mol) has imposed severe penalties on those who will perform Hajj without a permit.

WHAT ARE THE PENALTIES?

According the penalities and violation chart the following punishments will be given to Saudi citizens and residents of the Gulf Cooperation Council countries who violate the rules and regulations.

• Anyone who goes to Mina, Muzdalifah and Arafat without a Saudi or Gulf Hajj permit will be fined 15000 SAR. Punishment will be doubled in the HAll season.

• Anyone who is caught without a Saudi or Gulf Hajj permit in inner belt around Makkah, around Mina, around Muzdalifah and Arafat, and at the Haramain Sharifeen train station in AI-Rasifah, will be fined 10,000 SAR. Those who are caught outside the Hajj places will not be given the opportunity to perform Hajj.

• People who will take pilgrims who do not have a Hajj permit to places of pilgrimage will be fined up to 50,000 SAR . The vehicle carrying the pilgrims to the Hajj places will also be Confiscated. The decision of confiscation will be issued by the court and the transporter will also be advertised. He will be expelled from the country for violating non-Saudi and non-Gulf Hajj laws. He will be barred from entering the country.

• Every year from 25 Shawwal, foreigners and immigrants living in the country will be barred from going to Makkah.