Sign in
Welcome! Log into your account
Forgot your password? Get help
Password recovery
Recover your password
A password will be e-mailed to you.
Life Of Arabs A complete guide for those who are living in Middle East or planning to come soon.
Advertisement
Home Saudi Arabia General Information A cleaner in Makkah who is said to be a millionaire –... 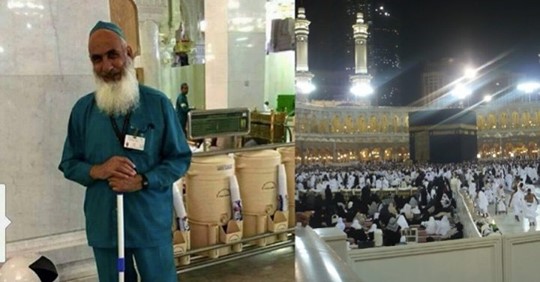 A photo of a Makkah cleaner has been circulating for the past few days, along with the fantastic story that he is a millionaire from India. A man from Makkah went to offer his salah in Masjid Al Haram, according to a trending story that I happened to read on Twitter.

This cleaner is said to be a millionaire – story

He went to a cleaner after finishing his prayers and offered him a few riyals. Saudi Arabians are very generous to the Masjid al-Haram cleaners. Both locals and visitors, including this man, pay these cleaners a few riyals as Sadqa.

Despite the fact that he was a millionaire, the cleaner refused to accept the sadqa money. He even showed the man his valet, which was stuffed to the brim with cash and credit cards. Why was this millionaire washing the floors of the Masjid, the man was perplexed.

The cleaner revealed that he is an Indian who owns a hotel chain in India after further examination. He has been blessed by Allah Almighty with a great deal of money and wealth, and he aspires to be a worthy servant of Allah.

He aspires to be a humble man who is appreciative for the blessings he has received. In his humility, he should clean Allah’s house with his own hands.

Why does he work as a cleaner

The cleaner comes on a work visa from India to clean the floors of the Masjid Al Haram in order to be a loyal and humble servant of Allah and to provide some services in His path. When the man enquired about the cleaner, the cleaner’s neighbors told him that he is a millionaire who has come only to seek Allah’s happiness.

The story moved me deeply, and I noticed that people on social media were praising the cleaner’s simplicity. They described the man as extraordinary, claiming that he is a millionaire who performs such simple job.

On social media, people were spreading his story as well as his photo. The narrative is, without a doubt, inspirational. But, because the author was unknown, I wanted to verify if the narrative was accurate before believing it.

The writer had not given his or the cleaner’s names, which led me to believe that this was not the case.

Is it a true story?

To my surprise, it wasn’t true at all. A YouTube video I found filmed the very cleaner who disclosed that he is not a millionaire.

In an interview, the cleaner stated that his name is Muhammad Aslam and that he has worked as a cleaner at Masjid al-Haram for 25 years! He is surprised when he learns of the false stories about him!

He may not be a millionaire, but his services have earned the hearts of millions throughout the world! We wish him pleasure and pray for him.

Before I end, I must say we shall not share posts that are unauthentic. I wish the writer of the false story learns that such things have a serious impact. People might stop giving charity to him! We might deem him a wealthy person, yet he is not!