Sign in
Welcome! Log into your account
Forgot your password? Get help
Password recovery
Recover your password
A password will be e-mailed to you.
Life Of Arabs A complete guide for those who are living in Middle East or planning to come soon.
Advertisement
Home Saudi Arabia General Information Is it permissible for a pilgrim to travel between Makkah and Madina... 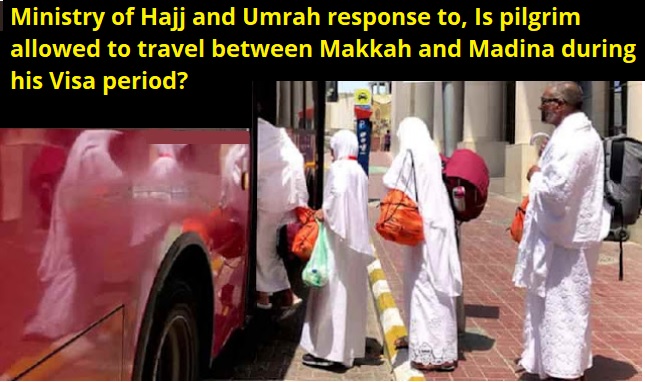 During his 30-day visa period, the pilgrim is allowed to travel between Makkah Al-Mukarramah, Al-Madinah Al-Munawwarah, and all other cities in Saudi Arabia, according to the Saudi Ministry of Hajj and Umrah. Read More: How to cancel a SIM card online registered under Iqama?| 2022

The ministry responded to a query from one of the pilgrims on Twitter, saying that the period of stay for those coming on Umrah visas is 30 days, and that the pilgrim has the freedom to travel between Makkah Al-Mukarramah, Al-Madinah Al-Munawwarah, and all other cities in the Kingdom during his allowed period of stay on an Umrah visa. Read More: In the new house, Saudi parents discovered five children dead.

Previously, the Hajj ministry emphasized that the age categories for which the Umrah permission has been allowed are those aged 12 and up, with the condition that the health condition status ‘Immune’ shows in the “Tawakkalna” application and reservations can be made using the “Eatmarna” application. Read More: We will lose Madinah if we failed to protect Jerusalem — Erdogan

On Twitter, the Ministry of Hajj and Umrah got a question asking if it is possible for non-pilgrims to go directly to the Grand Mosque of Makkh to do Umrah, prayers, and Tawaf without having to acquire transportation tickets. Read More: In Saudi Arabia, can unmarried couples live together?

In its answer, the Ministry of Hajj and Umrah stressed that the issuance of an Umrah permit does not necessitate the purchase of transportation tickets, which are optional and not mandatory for all age categories. Read More: In Jeddah, Saudi Arabia, there are eight markets where you should buy gold.

The another way to buy transport tickets, when you arrive at the bus stop at Kadi and Jamarat stops, and you can buy them by cash or bank cards. Read More: Human Resources: There is no truth to what you say about not recognizing any unregistered or documented paperwork contract as of today