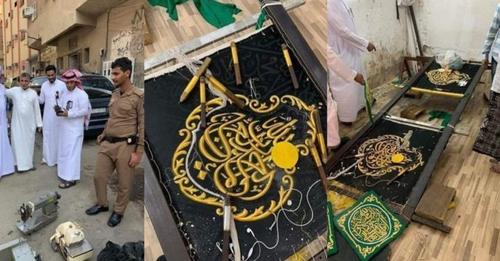 The Holy Kaaba’s (Kiswa) cover is changed every year, and the holy cloth is distributed to Muslims all over the world.

Saudi authorities recently detained 20 people for creating fake kiswa and selling it under the guise of a genuine one at a premium price.

Expats from Pakistan, India, and Bangladesh have all been detained.

A film has also been released so that the public may see how these con artists deceived people.

There were some reports about the illegal operations that were taking place there. Police were able to apprehend 20 persons from various Asian nations during a raid. It consists of both males and women.

The raid occurs at the ideal time: the perpetrators were involved in the manufacture of phony Kiswa. The black cloth was being stitched with Quranic verses.

People all throughout the world are appalled at how these con artists have used people’s emotions. They are cursed by the people.

Beware, there are those in our midst who are willing to sell everything for money!