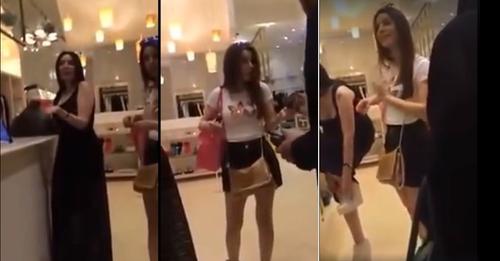 The Dubai Municipality is now providing Abayas to ladies who do not comply with the Emirates’ dress code when visiting city areas or business centers. Read More : Saudi Woman is Arrested for Hip-Hop Dance While Wearing a Niqab

This new move comes after multiple reports that women would frequently arrive in scanty or revealing apparel, according to Al Arabiya on Tuesday. Read More : Parents forgot 3-years old at Airport – caught with CCTV

According to the paper’s story, the new revelation has been quickly followed by film that has gone viral in the previous 24 hours, showing Egyptian actress Abeer Sabry being chastised and warned off by a local UAE woman. Read More : 5 Years Jail + 2,400 lashes for breaking his mother’s teeth

According to reports, a local UAE woman believed that the Egyptian actress was not adhering to and insulting her country’s dress code. Read More : Plane forced to turn, mother forgets newborn at Jeddah airport

In the video, a woman from the UAE can be heard saying that this is her country and that she may say whatever she wants, but that the Egyptian actress should dress respectfully. Read More : Saudi Family Visit Visa Types and Validity | Latest

Sabry and another woman with her began to argue that she had no right to tell them what they should and should not wear.

It was also said that ladies who did not dress adequately in accordance with the code of conduct could not be allowed to enter the building at all.

What is the dress code?

Any transparent article of clothing that exposes any portion of your body that should be covered or has any obscene or insulting phrases and photos is not permitted to be worn in public. Read More : Ministry of Labor Launched Mobile Application to File Late Salary Cases in Saudi Arabia

One of the municipal officials expressed displeasure with the clothes worn by some women while visiting these organizations. He went on to say that we wouldn’t believe the attire worn by some of the women who visited the institutions. Read More : Top 8 Coldest Places to Visit in Saudi Arabia During Winter Season