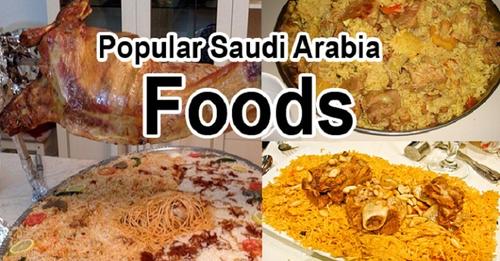 Mandi is the most well-known Saudi Arabian meal, and it is not to be missed. Mandi is a popular meal that is offered at practically every happy occasion, such as weddings or corporate celebrations. It’s a dish that everyone should try!

If you’re seeking for instructions on how to cook this delicious Saudi Arabian culinary dish at home, look no further. Although the Mandi Saudi Arabian meal recipe is extensive, it is best to sample it at a professional restaurant like Redan.

Kabsa is another rice-based Saudi Arabian traditional meal. Rice, meat, vegetables, and spices come together to make this dish! Isn’t it fantastic? It’s even better in flavor! The Saudi Arabian meal recipe for Kabsah has previously been published.

Saudi Kabsah is the country’s national food, which many people are unaware of. After all, it’s only after you’ve had it that you’ll understand why it’s been designated as Saudi Arabia’s national dish.

Bukhari rice, also known as Ruz al Bukhari, is an Afghani specialty. It’s such a common, wonderful, and classic Saudi dish that you can find it in almost any restaurant! It is without a doubt the most popular Saudi Arabian food.

Some people confuse it with Saudi Arabia’s national dish, however there is a significant difference between the two.

The roast chicken is served alongside this rice dish. It’s also delicious when served with the spicy tomato sauce, chopped fresh lettuce, and fried potato cubes. If you’re ever in South Africa, make sure you try Roz Bukhari! We’ll be publishing the Saudi Arabian meal recipe for Roz Bukhari soon.

Mutabbaq is another traditional Saudi Arabian dish that is a Saudi favorite! This Saudi Arabian cuisine is now being offered with great fervor and zest in Yemen, India, Indonesia, Malaysia, Singapore, Brunei, and Thailand, in addition to the south of Saudi Arabia.

Mutabbaq is a dish with a variety of flavors and components. Combinations of Kabsa, Jereesh, and Gursan are used to create it. It can be served as an appetizer, as a side dish, or even as a snack. And believe me when I say that having it as an option is fantastic!

In the winter, a plate of Ferek is all you’ll want once you’ve had it! It’s a delicious winter delicacy from Saudi Arabian cuisine! It’s created with brown onion paste, spices, and sugar. It has a superb taste thanks to the spices added, and it is not as sweet as Hainini.

Another specialty of the Kingdom of Saudi Arabia is saleek. It’s a Saudi Arabian meal that’s impossible to resist and never gets old!

Whole chicken, ginger, garlic, salt, pepper, red chile, paprika, cumin, and coriander powder are among the components of this Saudi Arabian cuisine. If you haven’t eaten Saleek, you have no idea what delicious and appealing cuisine tastes and looks like!

Harees is another way to say Jereesh. This dish from Saudi Arabia is one of the best and most popular dishes in the country.

The flavorful Saudi Arabian cuisine is made with a combination of cooked and cracked or coarsely ground wheat finely mixed with meat.

During the month of Ramadan, it is frequently consumed in the Arabian Gulf countries. Harees can be cooked in a variety of ways, all of which are delicious. Serve the Harees, which are elegantly garnished with parsley.

Arekah is a popular meal among Saudis and is commonly served for breakfast. It is a nutritious and tasty Saudi Arabian dish that was created to help people get through difficult times. The meal has now become one of Saudi Arabia’s most popular dishes.

In the breakfast meal, this Saudi Arabian cuisine is in high demand. Although the meal originated in southern Arabia, it is currently popular throughout the kingdom. Not only is the name intriguing, but a platter of Arekah would be a delicious treat!

Margoog is another popular and delectable Saudi Arabian dish. The meal has a soup-like texture and incorporates meat, veggies, and a specific sort of wheat paste.

Mofatah is one of Saudi Arabia’s most popular and delicious dishes. Sheep is used in this meal. Because it is difficult to prepare at home, Saudi Arabian cuisine is proudly offered on special occasions and celebrations!

Because the dish is so popular, several restaurants now provide the service of cooking it for customers in exchange for the donation of sheep by the person who orders it.

Maqluba has become one of the most well-known Saudi Arabian foods and locations. In nations like Syria, Palestine, and Lebanon, the dish has grown in popularity. The dish comes from the Levant and is a traditional Levantine cuisine.

This Saudi Arabian dish is made with a combination of meat and rice, as well as fried veggies, and served in a pot. It is prepared using chicken and lamb meat, and it is served with tomatoes, potatoes, cauliflower, and eggplant.

Another popular and well-known Saudi Arabian culinary dish is shakshouka, sometimes known as shakshuka. The dish’s main element is an egg. To give it a great and novel flavour, the eggs are poached in a sauce of tomatoes, jalapeño peppers, and onions.

Artichoke hearts, potatoes, and broad beans are also added to the recipe to give more flavor. The dish is well-known throughout the Middle East and the Maghreb.

In Saudi Arabia, have you heard of Mahela? Mahela is one of the most well-known Saudi Arabian cuisine. In Syria, Palestine, and Lebanon, this meal has grown in popularity.

The meal is popular at home gatherings, big events, and even weddings! A superb platter of Mahela would take an hour to prepare. Make sure to include spices, because Mahela isn’t complete without them!