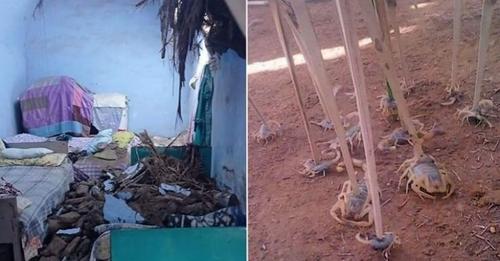 
An army of scorpions stormed the settlement of Aswan in southern Egypt. Around 500 individuals have been stung by scorpions, with many of them dying and others being admitted to hospitals.

The scorpions have left their burrows and reached a human habitat in the Aswan region because to severe rains, terrible weather, and floods.

Following the downpour, millions of scorpions decided to travel to a neighbouring village, stinging everyone who got in their way.

The Ministry of Health has stated that necessary measures are being taken to address the situation. According to the ministry, there are enough antiserums for the entire population. Anti-serum dosages have been allocated to the inhabitants of Aswan in the amount of 3,350 doses.

The doctors in the areas are quick to administer the vaccine to patients who exhibit such symptoms. The scorpion’s highly poisonous venom can kill its victims in as little as an hour.

The people were informed that very dangerous and poisonous scorpions such as the “Arab fat-tailed scorpion” live in the Aswan’s hilly regions.

Aswan village residents are noted for their charity, simplicity, and compassion. This horrific scorpion sting has created quite a stir on social media. Netizens are urging the authorities to reach out to the people of Aswan as soon as possible to save their lives.