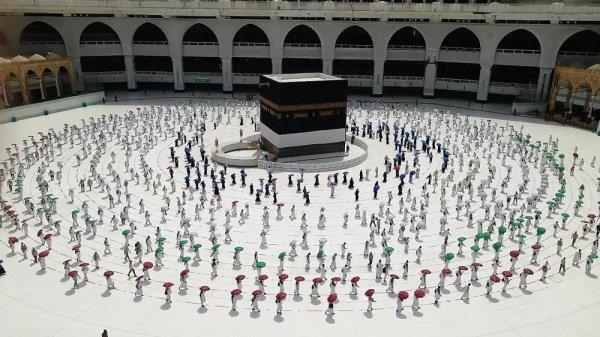 At a time when millions of Muslims travel to the valley of Mina on the first day of Hajj, the women of Makkah head to the Grand Mosque to honor a pastime tradition only recently broken due to the COVID-19 pandemic.

The Day of Arafat, the holiest day in the Islamic lunar calendar, is dedicated to prayer and unity, and is a significant event for Muslims.
It is also a day that bears witness to a local phenomenon that has been practiced for ages. As millions of pilgrims head to Mount Arafat on the ninth day of Dul Hijjah, the official first day of Hajj, silence sweeps over Makkah, especially the Grand Mosque.
In mere hours, the floors of the Mataf around the Kaaba — once filled with people circumambulating in the white Ihram — is replaced with a mere handful of people, who are mostly women.
The phenomenon has been witnessed for as long as many can remember and is locally known as “Yawm Al-Kholeef,” derived from the Arabic word for “void” or “empty.”
When women and children head to the Grand Mosque, the men head five miles due east to Mina valley with the pilgrims.
Every year, Makkawis, known as “mutawefeen” across the city, prepare themselves for the Hajj season as soon as Eid Al-Fitr ends as they await pilgrims arriving from Jeddah through their ‘wukalaa’ or agents.
Women prepare their homes for welcoming and lodging their guests, who will stay for either a few days or up to four months, depending on the agreement between the mutawef, the wakeel, and the pilgrim.
“The relationship between pilgrims and mutawef is solid and is not controlled by economic interest,” Faten Hussein, a matawefa and journalist specializing in Hajj and Umrah, told Arab News.

The relationship is rather governed by human, spiritual, and religious ties. The profession, for the first generation of mutawefeen, was handed down for generations and considered an honor for those who serve and assist the pilgrims, looking after their comfort.”
On the eighth day of Dul Hijjah, men across the city — old and young — gather the necessary food, tents and gear, before guiding the pilgrims from the Grand Mosque to Mina, where they will stay for the duration of Hajj before they move to Mount Arafat after dawn on the ninth, marking the day of Arafat.
“The mutawefeen would then take the pilgrims to the Grand Mosque while praying along the way.
“The mutawef’s sons and at times even his daughters would be walking in the back with the female pilgrims. This is to ensure that pilgrims stay with the group and do not get lost nor left behind,” said Hussein.
Until the recent closure of the Grand Mosque due to the pandemic, women often would gather their friends, family members, and neighbors, pack their food and gear and head to the mosque to spend the day praying while they wait for sundown to break their fast.
In Islamic tradition, abled Muslims who are not performing Hajj are recommended to fast on the day as “it expiates the sins of the preceding year and the coming year.”

After spending the whole day at the mosque dedicated to their prayers and supplications, preparations for Eid begin, with women heading to nearby souks to buy toys for the children of the family and sweets for visiting guests.
Today, women still take advantage of the empty mosque and head out to perform Umrah rituals or spend a day praying at the mosque, something that became an annual habit for many in Makkah and nearby cities.
Jeddah-based graphic designer Nedaa Zuhair told Arab News that in her childhood, she noticed her grandmother and aunts going to Makkah every year on Arafat Day as she spent the day at the house of an aunt who decided to stay back.
“Up until recently, I’ve noticed that more and more women would head to Makkah for the day.