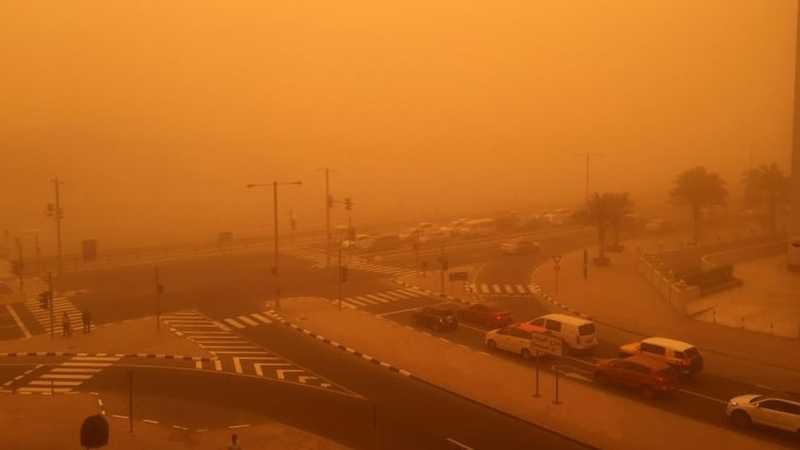 The city of Arar, located on the northern borders of the Kingdom of Saudi Arabia today, was affected by a severe sandstorm that caused a lack of horizontal visibility, and this storm is heading towards Kuwait little by little.

Videos on social media showed the density and dirt rising dramatically over residential areas in the city.

Dr. Abdullah Al-Misnad, Professor of Geography at Al-Qassim University, published a video of the city of Arar, in which he explained that the horizontal visibility reached zero.

Al-Misnad confirmed that the expected dust storm formed at 6 and a half in the morning in Al-Jawf, the northern borders and southern Jordan, as it was moving towards the south and southeast at a horizontal speed ranging between 70-90 km / hour, and wind gusts were recorded in the Qurayyat area 97 km / hour.

The Kuwait Meteorological Department warned of an expected activity of dusty winds, and stated that activity is expected in northwest winds that may exceed 70 km / hr, causing dust, with the horizontal visibility reduced to less than 500 meters, and it may be absent in some areas, especially areas. The exposed and lead to a height of more than 7 feet.

The meteorologist, Issa Ramadan, had warned in a statement to Al-Qabas about the intensity of the winds during the next 24 hours, stressing that the winds will be strong today, Friday, especially in the afternoon period.

And Ramadan indicated that the northwest winds get much stronger, advising not to go out after the afternoon period tomorrow, and indicating that the strong winds will be accompanied by dust and may carry pollutants, as well as plant pollen, as he stressed the need to adhere to wearing masks.

He pointed out that his advice to people to return home tomorrow before 3 pm, especially with alerts from the Meteorological Department, which extends to Saturday dawn, adding that this air change undoubtedly affects the respiratory system, especially for those suffering from diseases such as asthma and allergies.

LifeOfArabs - April 13, 2021 0
Saudi Arabia has banned the sale of tobacco to people below 18 years and also banned smoking in areas where children are...