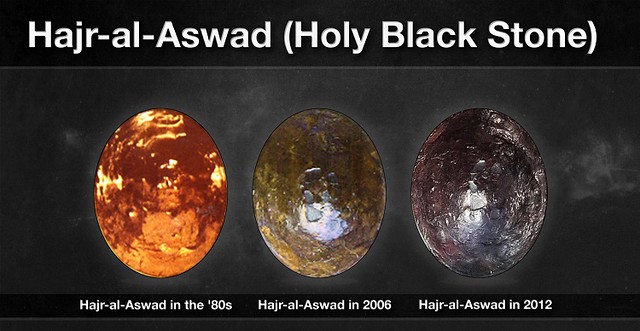 The Black Stone also known as Hajr-e-Aswad is a stone bestowed down from the heaven. It is not an ordinary stone; Muslims have affiliations with it. The stone is located at the eastern cornerstone of the Holy Ka’bah.

Muslims around the world try to kiss it and see it whenever they visit Makkah for Hajj or Umrah. The stone is now held safe in a silver frame. Visitors can see through the opening of the frame. It is considered sacred as it was set by the Holy Prophet (PBUH) and is blessed from heavens. It is also known as the foundation stone of Holy Ka’bah.

Hajr e Aswad is held safe in a frame

Muslims around the world try to kiss it and see it whenever they visit Makkah for Hajj or Umrah. Hajr e Aswad is now held safe in a silver frame to avoid the risk of being stolen again.

It is considered sacred as it was set by Prophet Ibrahim A.S. and is blessed from the heavens. It is also known as the foundation stone of Holy Kaaba.

Hajr e Aswad was taken from Makkah and remained lost for 23 years! The Qarmatians took Hajr e Aswad in January 930 and took it to their Hajar base (what now is Bahrain) by the Qarmatian leader, Abu Tahir al-Qarmati.

The Holy Kaaba was attacked

On the very first day of Hajj, the Qarmatians attacked Makkah with an intention to steal Hajr e Aswad. The Qarmatians’ army came up with their horses and entered Masjid al-Haram.

They started massacring the pilgrims brutally. The reports indicate that about 30,000 pilgrims were killed as they were praying around the Kaaba.

They looted the Kaaba, destroyed the buildings, houses were plundered, slaves were seized, Hajr e Aswad was stolen and the dead bodies of pilgrims were thrown in the well of Zamzam to despoil it while other dead ones were left on streets to get rotten away.

History tells us that Abu Tahir then stole Hajr e Aswad and held it in his possession. He took it to Masjid Dirar so that it could be placed there. He wanted to make the Masjid a sacred place and redirect the Hajj from Makkah to Masjid al Dirar. But he never got what he wanted!

He died the most horrific death, his body and flesh were eaten away by worms.

The stone was taken away 23 years later by paying huge ransom money.

The Abbasids had to pay a huge amount of money to get the black stone back. The stone was broken down into seven pieces during its hostage and removal.

History of the Silver, Gold Doors of Holy Kaaba in Makkah over 5000 years

Hajj and Umrah spokesman: No official instructions have been issued yet regarding the Hajj season

LifeOfArabs - May 11, 2021 0
The Ministry of Interior has announced that all unvaccinated non-Saudi travelers will have to undergo institutional quarantine for 7 days.

The Ministry of Interior: Amending the schedule for the classification of...