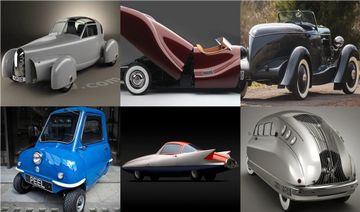 Car designers seek to innovate new designs, in line with the development of industries, to meet the needs of the public, and to compete strongly with competing companies.

Some of the designs, which were once wonderful, raised some astonishment over time, while others maintained their distinction and remained stuck in the memory of those who acquired them.

These are the strangest cars and designs in the world since the emergence of cars in the early twentieth century.

Norman Temps: It is considered one of the most elegant cars in the world, with its strange design. It is long in the front and does not have any doors, and this is what made it enter the list of 10 strangest cars in the world, and it was named after its designer “Tempus”, who took 3 years to produce it especially Just doing.

Stout Scorpion: It was the first small car to come to light in the 1930s, and it had a fairly small front end and a wide wheelbase, and due to its strange design it did not gain widespread popularity, and it produced only 12 of them.

Bugatti 57: Although the company produces thousands of models, the Bugatti 57 is the strangest one, distinguished by its two-cam engine and its gear wheels

Le Saber: General Motors was inspired by the design of the plane, and it is characterized by length and convexity from the front, and it was classified among the 10 strangest cars in the world, and people looked at it with astonishment in the 1950s.

Ford Speedster: It did not have much importance in its year of manufacture, but when its owner in 2016 brought it to light again, it impressed many and a copy was sold for $ 770,000.

Bill B50: Bill B entered the Guinness Book of World Records as the smallest car in the world, and was distinguished by its unique design with its three wheels and its tilted body to the shape of children’s toys, some companies are currently simulating its structure.

Tasco 1948: Its design was inspired by aircraft, as it was famous for its closed cockpit, where the driver and passengers could lift the glass panels from above, so that they could get out, and the four wheels were completely covered.

Ferrari 512: Also designed in the shape of the spacecraft that appears in science fiction movies, it is a tapered car, both front and rear, and is characterized by high tires.

Many people suffer from snoring, what are its causes, and how do we get rid of it

Why does the world celebrate International Women’s Day on March 8 every year?