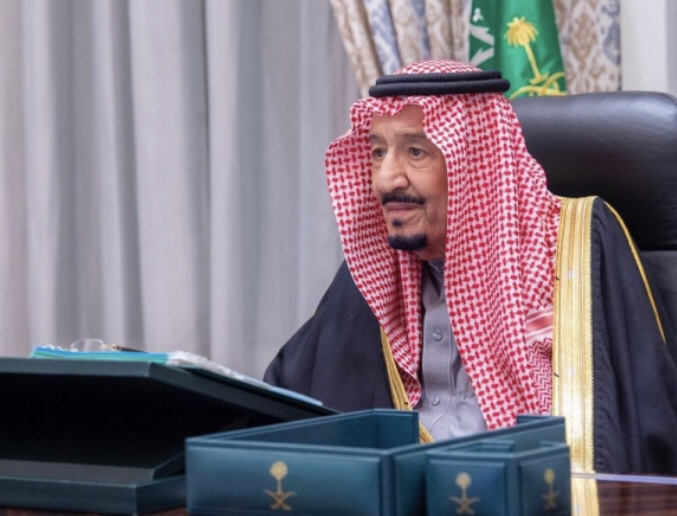 Saudi Arabia will take all necessary measures to preserve its territories and safety of its citizens and residents on its territories in accordance with international laws, the Cabinet noted on Tuesday while referring to contents of the message addressed by the Kingdom’s permanent delegation to the United Nations to the Security Council.

In a virtual session chaired by Custodian of the Two Holy Mosques King Salman, the Cabinet reiterated the Kingdom’s call for denouncing the cowardly terrorist attacks carried by the Iran-backed Houthi militia targeting Abha International Airport and its hostile actions aiming to undermine peace in Yemen.

At the outset of the meeting, the Custodian of the Two Holy Mosques briefed the Cabinet on the contents of the written message he sent to Egyptian President Abdel Fattah El-Sisi. The message stressed the depth of historic relations binding the two countries and emphasized the Kingdom’s keenness on enhancing strategic cooperation between the two countries at various levels in addition to consolidating joint work and coordination on various regional and international issues.

In a statement to Saudi Press Agency (SPA), Acting Minister of Media Dr. Majid Al-Qasabi pointed out that the Cabinet renewed the Kingdom’s support for peaceful efforts to establish security and stability in the Middle East and the Eastern Mediterranean. The Cabinet also pointed out to the Kingdom’s affirmation before “Philia Forum — Building Friendship, Peace and Prosperity from the Mediterranean to the Gulf” on the importance of intensifying consultations and coordination to safeguard peace and security in international sea lanes, in a manner that guarantees freedom of trade and navigation, respects the principles of sovereignty and good neighborliness among states, and condemns any external interference in the internal affairs of states, including threatening international peace and security and global economic stability.

The Cabinet expressed Saudi Arabia’s strong condemnation and denunciation of the cowardly terrorist attacks that targeted Irbil International Airport, and fully stand with Iraq in all its measures to preserve its security and support its efforts in fighting terrorist organizations that seek to undermine its stability and influence its sovereignty.

The Cabinet reviewed the developments of the novel coronavirus (COVID-19), a set of reports on the latest virus statistics in the Kingdom, and the relevant indicators.

The Cabinet was briefed on the issues on its agenda, including some co-studied by the Shoura Council.

The Cabinet issued the following decisions:

1. The Cabinet authorized the minister of investment — or his representative — to discuss and sign a draft of the memorandum of understanding in the field of encouraging direct investment, between the government of Saudi Arabia and the government of Kuwait.

Trending Now  A person infected with "Corona" despite receiving two doses of the vaccine ... and "Health" is interacting with it

2. The Cabinet authorized the chairman of the board of directors of the General Authority for Competition — or his representative — to discuss and sign a draft of a memorandum of understanding between Saudi Arabia and Egypt in the field of promotion of competition and combating monopolistic practices.

3. The Cabinet approved a memorandum of understanding between the Saudi Data and Artificial Intelligence Authority (SDAIA) and the International Telecommunication Union (ITU) for cooperation in the field of artificial intelligence.

4. The Cabinet approved a national policy for radioactive waste management in the Kingdom.

5. Transformation of the regulation agency of the Ministry of Finance into an independent center named the National Center for State Resource Systems.

6. Ministry of Human Resources and Social Development in coordination with the executive council of the Consumer Protection Association, to take necessary steps to align the conditions of the Association in accordance with the provisions of associations and civil institutions regulations.

7. Revoking Saudi Railways Organization and its regulations issued by a royal decree and to be replaced by the Saudi Railway Company (SAR).

8. Approval of the establishment of a bank for small and medium enterprises.

9. Approval of the medical devices and supplies system.

10. The Cabinet approved a number of promotions at the 14th and 15th ranks.