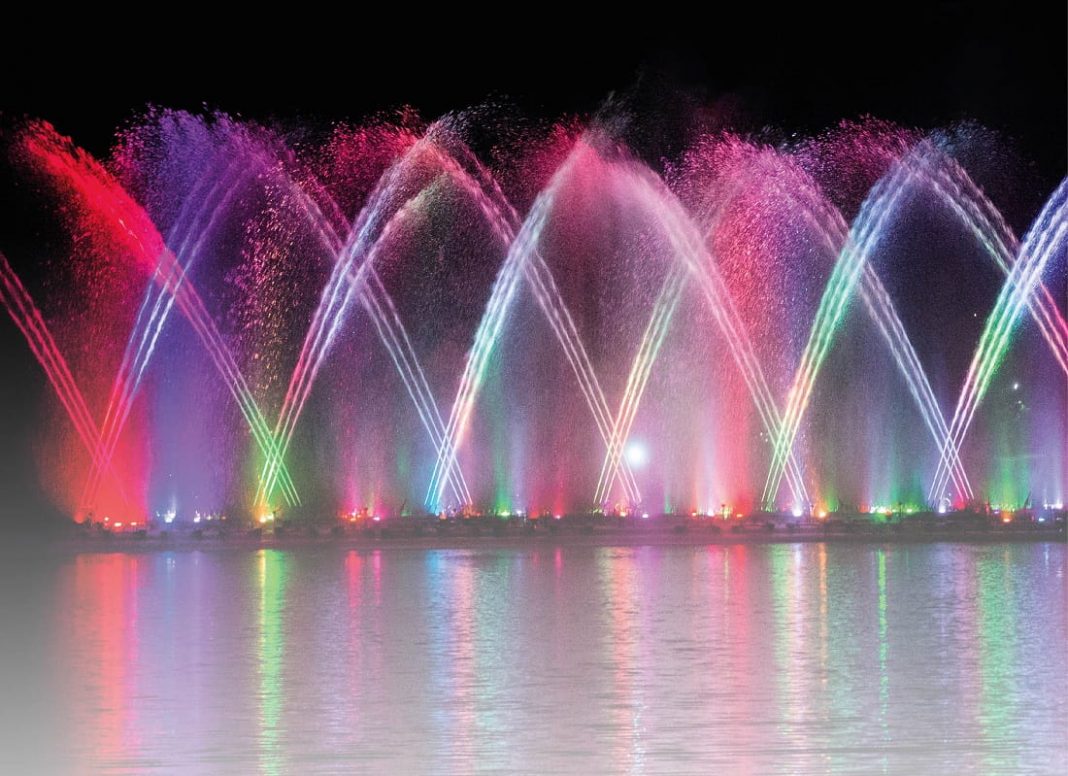 As the leisure season is going to begin on October 15th, Riyadh is planning to open the largest dancing fountain of the world.
Where the fountain is located?

The dancing fountain will be located at the Prince Mohammad Bin Salman road in a commercial complex surrounded by restaurants and cafes.

Which is the current highest fountain?

According to the records, the fountain ejects estimated 18 tons plume of water for an approximate 312 meters. It is visible from all over Jeddah located at Al-Hamra Corniche.
World’s First Dancing fountain

The dancing fountain was built for the very first time in the Transylvanian town of Marosvásárhely by Péter Bodor, a Hungarian gadgeteer and mechanical engineer. The fountain is named a “The Bodor Fountain”.


What is a fountain?

The word Fountain is derived from a Latin word “Fons” meaning to throw or jet of water into the air. A Fountain is an arrangement, usually made by man. The water from a source is captured in some way in its basins. Sometimes jets are used to make the water go high into the air, using pressure. It is also common to have sculptures in fountains.
First Fountain of the world

Fountains are dated back as early as 3000 years ago even in ancient Greece and Rome. All the historical places had fountains of variant architecture leading into the history of fountains.

Trending : We intend to officially launch the Riyadh Metro at this time this year, Chairman of the Royal Commission said

The very first mechanically operated fountain was built in the 15th century in Italy. Later in 16th and 17th century, they were considered as “stations en route to illuminations” and made their way into the gardens of Italian, Roman and Tuscan villas.
The largest choreographed dancing fountain

Dubai holds the title of world’s largest and best-choreographed dancing fountain of the world. Yes, even the water fountains are well choreographed with music and lightning at the centre of Downtown Dubai in Burj Khalifa Lake. It dances from Arabic songs to Michael Jackson songs.

Some of the tallest fountains in the world

Following are some of the tallest fountains in the world no one wants to miss seeing them if visiting these countries.
1). King Fahad Fountain Jeddah, KSA

It was created in 1950 near Burj Kahlifa. The fountain throws water 853 feet above sea level.
2). Gateway Geyser Fountain, Mississippi

Constructed in 1995 at the Mississippi river gateway, it throws water up to 650 feet high in the air.
3). KPT Fountain Karachi, Pakistan

Built-in 2005 for the scenic beauty of sea view in Karachi, the fountain throws water 620 feet above sea level in the air.

One of the oldest fountains in the list is Arizona fountain built-in 1979 throwing water 560 feet above sea level.
5). Jet D’Eau Fountain Geneva, Switzerland

Installed in 1951, at the promenades of Geneva, the fountains ejects water up to 295 feet above sea level adding up to the scenic beauty of the city.

Also Read :Traffic” catches a driver who harassed a woman on a road in Jeddah and tried to stop her car by force

LifeOfArabs - February 6, 2023 0
If traveling by road or from KSA, Saudi Iqama holders and GCC residents can obtain an on-arrival visa at the Qatar border. Visa StepsIf all...