Sign in
Welcome! Log into your account
Forgot your password? Get help
Password recovery
Recover your password
A password will be e-mailed to you.
Life Of Arabs A complete guide for those who are living in Middle East or planning to come soon.
Advertisement
Home Saudi Arabia General Information A young man fulfills his father’s wish and gives him a car... 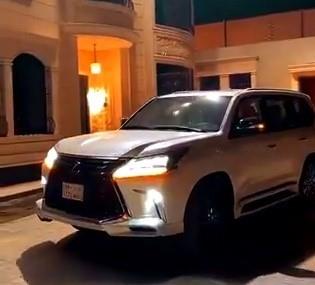 Saudi youth presented his father with a new Lexus, similar to the one that the Crown Prince drove and accompanied by the Emir of Qatar, Sheikh Tamim bin Hamad , at the request of his father, who expressed his admiration for the car at the time.

Muhammad al-Shahrani, the father of the young man, explained that when he saw the car that the Crown Prince and Sheikh Tamim was riding, he said to his son: “It is enough, men. Our lover rode for him a Lexus.

The young Abdul Qadir Al-Shahrani said in a video clip he posted on his Snapchat account that the car is identical to the one that appeared in the pictures, and was installed by Prince Mohammed bin Salman and Sheikh Tamim during their tour together in Al-Ula recently on the sidelines of the Al-Ula Gulf summit.

The father’s joy in the car was evident in the video through the phrases and shouts that he made, as he crossed when he received the car’s key and papers; On his thanks to his son for the valuable gift, by saying: “From the oath of what we lack, God bless your days.”

Also Read: Learn about the price and brand of “Jacket”, of the Crown Prince MBS. The company’s website is being disrupted due to pressure from visitors

LifeOfArabs - February 2, 2023 0
According to Hussein Al-Qahtani, spokesman for the National Center of Meteorology, the Saudi winter season will end on March 21. (NCM). He predicted that rain...