Sign in
Welcome! Log into your account
Forgot your password? Get help
Password recovery
Recover your password
A password will be e-mailed to you.
Life Of Arabs A complete guide for those who are living in Middle East or planning to come soon.
Advertisement
Home General Information Minister Al-Mashari: Citizens and expats can enjoy Digital ID in all transactions 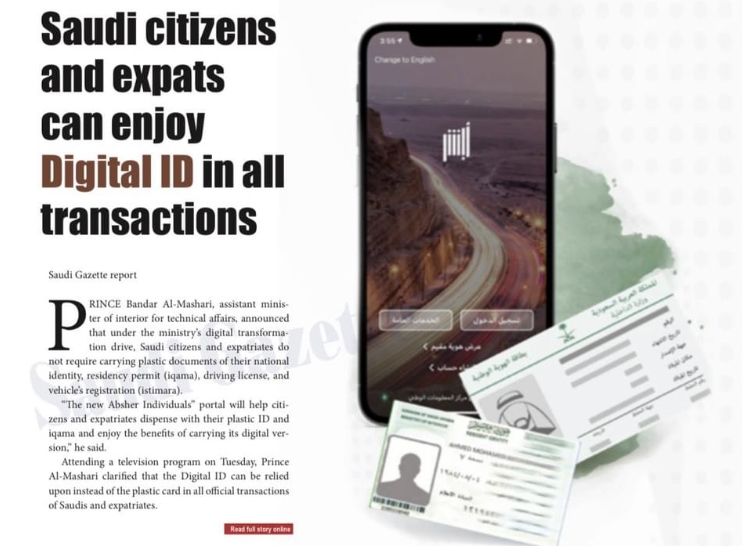 “The new Absher Individuals” portal will help citizens and expatriates dispense with their plastic ID and iqama and enjoy the benefits of carrying its digital version,” he said.

Attending a television program on Tuesday, Prince Al-Mashari clarified that the Digital ID can be relied upon instead of the plastic card in all official transactions of Saudis and expatriates.

These include showing it to security officials in the field inspection and dealing with transactions of banks, companies, individuals and government agencies, whether within the Kingdom or outside, he said while indicating that plastic documents would be the basic and last reference.

Prince Al-Mashari said the Digital ID can be shown through the “Absher Individuals” platform and a copy of which can be kept on smart phone so that the ID could be checked without the need for an Internet.

“The security officials can verify its reliability through the application of the Maidan platform,” he said.

Maidan is a uniform security platform for all field security works in various sectors of the Ministry of Interior to control the violations and organize procedures of handing the cases to the competent authorities in the security sectors electronically.

The minister pointed out that the “Digital ID Review” service is available on the interface immediately after opening the new “Absher Afrad” (Absher Individuals) application, indicating that it carries all the information as if the holder is carrying a plastic ID card.

It is noteworthy that the Ministry of Interior, represented by the Civil Status Department, launched electronic version of the ID card of Saudi citizens and expatriates under the name of “Digital ID.”

Muhammad Al-Jasser, spokesman of Civil Status, said on Monday that the Digital ID will facilitate the process of verifying the identity of those who do not carry their original ID card.

“It will enable the beneficiaries to view the ID data electronically through the variable QR code on the “Absher Individuals” application. The beneficiaries can download a copy of the Digital ID on the smart device to take advantage of it without the need to connect to the Internet,” he said.

The Civil Status Department launched the “Digital ID” service, in cooperation with the Saudi Data and Artificial Intelligence Authority, represented by the National Information Center.