Sign in
Welcome! Log into your account
Forgot your password? Get help
Password recovery
Recover your password
A password will be e-mailed to you.
Life Of Arabs A complete guide for those who are living in Middle East or planning to come soon.
Advertisement
Home Saudi Arabia General Information Saudi married for 47 years with 10 children, never seen wife’s face 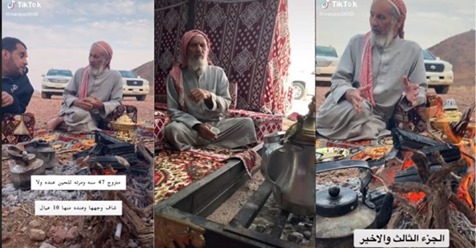 Can you Imagine that there is a couple in this world where the husband has not seen his wife face since the first day of their marriage and they also have 10 kids?

A Saudi man who has not seen his wife’s face

A few days ago a video of an old man went viral that attracted huge audience attention. The old man said it has been 47 years since he got married. He turned to an old man from a young lad and during all this time, he has never seen his wife’s face. @medoo9818

What is the reason?

However, when the interviewer asked the reason for not seeing his wife’s face for years, he said that his wife believes in old traditions and she is ultraconservative, she considers it very odd to show her face to anyone.

He further said, his wife did not want to show her face to anyone thus he never forced her for this and spent his life as it was going.@medoo9818

Tribal Tradition for not showing the face

In fact, it is a tribal tradition in some parts of Saudi Arabia where women do not show their faces even to their husbands. The Non-Islamic tradition has become obsolete in modern times but we still find some couples practicing it.@medoo9818