Sign in
Welcome! Log into your account
Forgot your password? Get help
Password recovery
Recover your password
A password will be e-mailed to you.
Life Of Arabs A complete guide for those who are living in Middle East or planning to come soon.
Advertisement
Home Middle East British tourist touched by Dubai cabbie’s honesty after he returns bag with... 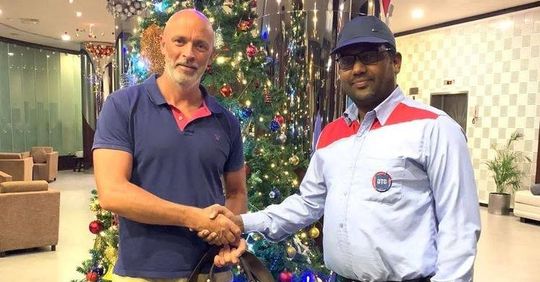 Dubai: An honest taxi driver in Dubai has returned the bag of a tourist with precious contents.

The Indian expat driver Firos CK, 38, hailing from Mallapur district, Kerala, tracked his customer down, Alan Gardner, 45 from Northern Ireland and returned the bag with all contents intact inside.

In a heartfelt telephone interview to Gulf News, Alan, who is on a visit to Dubai to meet his friends, said he was touched by the taxi driver’s honesty and perseverance, ensuring the bag would reach the hands of its rightful owner.

Alan, an entrepreuner in the UK, said that late Wednesday evening, December 9, he hailed a cab to get dropped off at a hotel apartments in Dubai Marina where he is staying. He was picked up from a hotel at Jumeirah Beach Residence (JBR). “I reached the hotel apartment at around 11 pm. I was exhausted and went straight to bed. At around 3am, I got a call from the taxi driver saying he had my bag and wanted to return it to me. Only then, it struck me then that I had not got my bag with me when I came up to my hotel room. I was so touched by the driver’s call. I don’t know where else in the world would a taxi driver do that.”

Contents in the bag

Alan said the bag contained his Rolex watch, worth thousands of dirhams. But more importantly, it was a gift from his wife and was precious to him. Then there was a three-week old Macbook PRO, an iPad, a personal diary (Smythson diary with a message to return the book to its owner if lost and his personal number).

The driver Firos said, “After I dropped the customer to his hotel, I picked up another customer. This person told me there was a bag left behind on the back seat. It was a navy blue coloured bag. That is when I realised that it belonged to the previous customer. So after dropping the current customer, I went back to the hotel where I dropped off the earlier customer. I told the security of the hotel what had happened. I asked if I could see their camera footage of people entering the hotel as then I would be able to recognise the gentleman. But they said that was not allowed.”

Firos, who was keen for the bag to reach its owner, then checked for contact details in the bag. The first page of a diary had a name and number written down.

“I had a feeling that the name Alan Gardner was from the UK. So I went to google and checked the international dial code for UK. I called the number. It was late, but I wanted to inform the gentleman his bag and contents inside were safe with me.”

When Firos finally called Gardner and went over to drop off the bag, it was around 3.30am.

Gardner, who was extremely touched by the driver’s honesty, wanted to thank him and offered him a tip. But Firos refused to take it.

“In my experience, people with such integrity and honesty are very rare in life,” said Gardner, adding that the driver was a huge asset to his organisation (RTA) to whom he was very grateful for.

LifeOfArabs - June 19, 2022 0
It is thought that the gold obtained from Saudi Arabia is pure. In Saudi Arabia, is gold affordable? We've included some advice on how...