Sign in
Welcome! Log into your account
Forgot your password? Get help
Password recovery
Recover your password
A password will be e-mailed to you.
Life Of Arabs A complete guide for those who are living in Middle East or planning to come soon.
Advertisement
Home Saudi Arabia General Information Has KSA discovered a new ZamZam well in Makkah? Viral Video 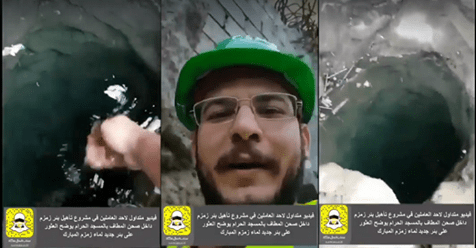 Everybody is quite aware of the ongoing work in the Holy Mosque in Makkah. Regarding that project recently a video went viral in which it was shown a new spring of Zamzam well was discovered.

That video was posted by a worker who was working on the ongoing Zamzam Project near the Holy Kaaba he claimed in his video that a new source of Zamzam water was discovered.

Everybody was impatient to know the reality of the new source of Zamzam well. As soon as the video went viral the authorities came into action to reveal the truth about that video.

It was reported from Makkah that the presidency for the affairs of the Two Holy Mosques has denied the discovery of a new spring associated with Zamzam Well.

The spring shown in the viral video was a part of an old well and it is not linked and has nothing to do with the Zamzam Well, said Al-Mansouri, The spokesman for the presidency of the Two Holy Mosques.

The new spring which was discovered recently is located 40 meters from the natural sources of the Zamzam Well, which is 20 meters east of the Kaaba. We should thank the authorities for revealing the truth.