Sign in
Welcome! Log into your account
Forgot your password? Get help
Password recovery
Recover your password
A password will be e-mailed to you.
Life Of Arabs A complete guide for those who are living in Middle East or planning to come soon.
Advertisement
Home Saudi Arabia General Information Moon to set directly above the Holy Kaaba before the Sunrise on... 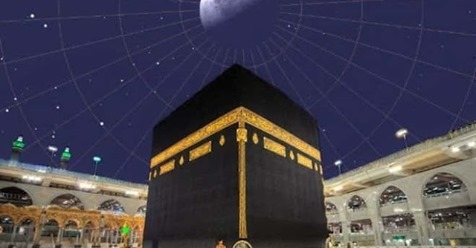 On Sunday (8th November), The sky of Makkah Al Mukarramah is going to witness the moon above the Holy Kaaba at 06:07 AM local time, just before the sunrise time in Saudi Arabia.

The head of the Astronomical society in Jeddah, Eng. Majed Abu Zahra explained that this orthogonality is 5th and last for this year 2020, the moment of being in contact will be at an altitude of 89.58.19 degrees and its disk is illuminated by the light of sun by 54.8%, at an angle of 95 degrees and the distance will be at 383,621 km. Trending : Five Professions not Covered in new Employment Contractual System in Saudi Arabia
– He explained that this phenomenon of the perpendicularity of the moon can be used to confirm the accuracy of the calculations of the movement of the astronomical bodies, including the moon, which makes determining its position very accurate in addition to the possibility of using this phenomenon in discovering the direction of Qiblah in simple way from several regions around the world. In the past, the direction of the Kaaba was calculate by such incidents.
– It is clear that, the 1st time in March 2020, The moon was seen in vertical shape on the Holy Kaaba, while on 8th November, the scene seen vertically above the Kaaba and it will be the last scene for this year.
– He said that the location of the moon for residents of places far from the Grand Mosque at the time of perpendicularity, in which the moon is seen indicates the direction of Makkah. See Also: Saudis Curb On Arrivals From 3 Countries
– Abu Zehra said that this incident of the moon coming up of the Holy Kaaba as an ideal opportunity for Photography, saying this scene will be attractive to photographers, when half of the moon will be shining with sunlight, while the rest half of the moon is in darkness with a blue sky behind it.