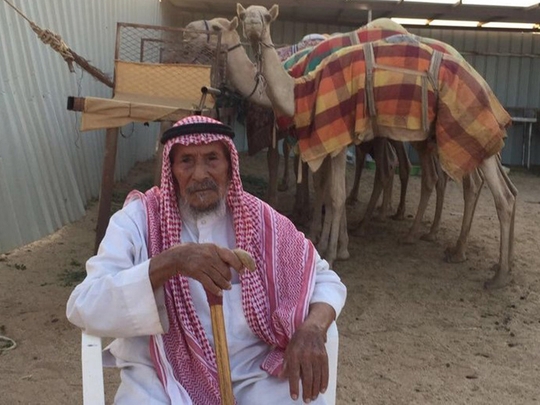 Manama: “I eat dates and drink camel milk,” 111-year-old Khunaifar Al Dhiyabi, a Saudi national, said when asked about the secret of his long life.  “In fact, there are no secrets as age is decided by God and not by people,” he said. “However, my daily diet is dates and camel milk. I also go for walk in the desert because it makes me feel at ease.”  His prescription for young people to live longer? “Eat homemade food, and avoid restaurant stuff because it is not healthy.”  Khunaifar said his national ID indicated he was born 111 years ago.

“That is my official age, but the fact is I am more than 120 years old, according to testimonies by older members of my family when they were alive.”  Does he feel lonely and left out? “No. I may need a cane to walk more steadily today and a [more comfortable] chair to sit on and I have to wear eyeglasses, but I have a good memory and I can recall events, dates, and major developments,” he was quoted by Saudi news site Sabq as saying.  Al Dhiyabi said he got married twice and had seven daughters and four sons.  “They have given us 38 grandsons and granddaughters. But I do not know all their names.”

His daily routine is very simple.  “I wake up early for the Fajr prayer. I then spend the day with the family and the camels. There is nothing out of the ordinary. And my advanced age is not an exception in the family. My aunt was much older when she passed away and her memory was very good till her death.”  Delving into the deep past, he recalled the hardships people had to brave to perform Haj and Umrah.  “It was quite a challenge with trips taking more than two months. I myself performed Haj three times riding camels. During one of the pilgrimages, I met King Abdul Aziz Al Saud, the founder of Saudi Arabia. We were on Mount Arafat and we greeted him. We used to refer to him as the Imam. He was a very pious man.”

Al Dhiyabi said he was proud to have pledged allegiance to all the kings of his country,  He also remembered how before courts were institutionalised by the state, disputes were settled by the tribal ruling system.  “It was like the courts today, but there were no prisons. Whenever there was a dispute between members of a tribe or between two tribes, and regardless of the status of those involved in the dispute, the case was invariably referred to the tribal council made up of elders. Their ruling was binding and nobody had the right to reject it or to challenge it.”  His memories of Saudi Arabia before the country was united by King Abdul Aziz are still vivid.

“The country was a group of feuding tribes that attacked one another. They pillaged, looted and killed, and each tribe leader was its political ruler. People did not feel safe and there was no real security. The situation improved only after Ibn Saud united the different parts of the country. The unification of the country was the unification of the tribes, and consequently of the society, and people felt safer,” he said.  “We also had a problem with communication in the old days. Whenever someone went to another village, we received no news about him for days. We heard about him only when he returned or if a traveller reported seeing him. I still remember the day my grandfather Muslih Al Dhiyabi offered 50 camels to members of the tribe so that they could use them as means of transport.”

Throughout his long life, Al Dhiyabi has never held a formal job. “Nobody wanted me to work, saying our family possessed the largest number of camels at that time and I was tasked, alongside others, with looking after them. The situation was not safe then and I was needed as a caretaker,” he said.  “Although looking after camels is difficult and challenging, their owners find pleasure in devoting time, energy and money to take care of them. An outstanding feature about camels is that they have a remarkable memory. They easily recognise the places where they grew up and even if they are moved to other areas, they yearn for their homes and pastures, just like humans.”  Some camels stop grazing to show their owners they want to go home, he added.  “I remember many such stories about camels. One camel was sold in Amman, but almost a year later, it came back to us in Hijaz [in Western Saudi Arabia].”

When Al Dhiyabi was growing up, camels were sold for 40 riyals and few could afford the price.  “Today, some camels fetch millions of riyals. Life has changed so much.”  The exact age of old people in most Arab countries cannot be easily verified due to the absence of formal birth records at that time.  In 2013, reports in Saudi Arabia said that a Saudi man died in the Kingdom at the age of 154 years. In the course of this life, Mohammad Bin Zarei, dubbed “the Dean of Centenarians”, had 10 wives, and was survived by more than 180 children, grandchildren and great grandchildren.