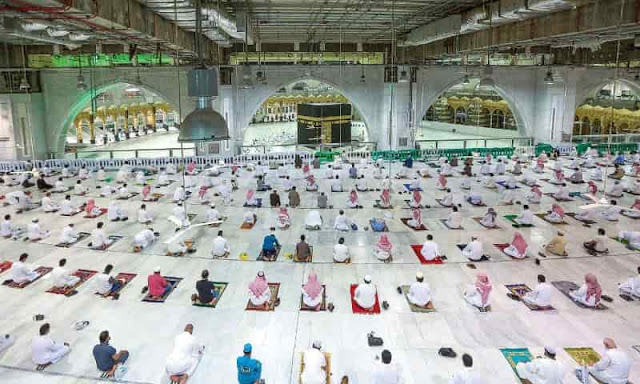 The Ministry of Hajj and Umrah in Saudi Arabia confirmed that foreigners coming from outside the Kingdom to perform Umrah pilgrimage will stay only for 10 days in the Kingdom of Saudi Arabia.

The Ministry also indicated that the period that was available for reservation since the application of ‘Eatmarna’ was launched is only until the end o the December.

The 3rd phase of return of Umrah begins from 1st November 2020, In this phase 20,000 Umrah pilgrims and 60,000 worshipers from inside and outside Saudi Arabia will be allowed to perform their rituals.

The General Presidency for the Affairs of the Grand Mosque and the Prophet’s Mosque is preparing to receive pilgrims coming from outside the Kingdom, during the third phase of the Umrah season, it includes raising the entire precautionary operational energy, intensifying the preventive measures and the recommended health protocols. Harnessing the human energies and technical capabilities provided by the wise leadership to create a healthy and safe worship environment for those in the Two Holy Mosques.

The service and administrative departments in the Grand Mosque of Makkah are preparing to sterilizing the Grand Mosque, its corridors and squares around the clock, to ensure a healthy and safe environment as per the health requirements for infection control

The Presidency is working on preparing and organizing squares and corridors to increase the numbers during the 3rd phase of the Umrah through staff and observers distributed over the main and subsidiary corridors whose tasks are to regulate the movement of worshipers and visitors inside the Grand Mosque and its squares.