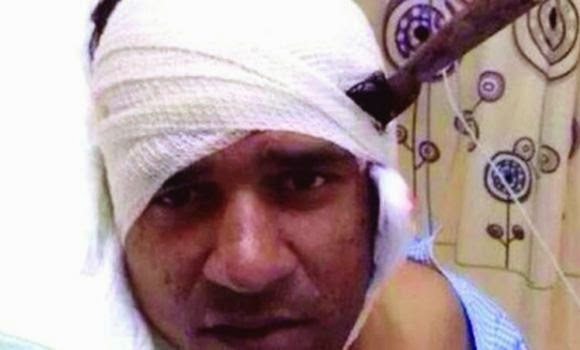 For the latest updates, you can join our WhatsApp group. Or Telegram Channel

A 24 years old Saudi attacked an expatriate to take his life with a knife. He was able to thrash a full knife in the head of 25 years old expatriate but if God is willing to save you, there is no one who can take your life.

Makkah police have confirmed that the picture you can see on this page is of the expatriate who became a victim of the attack of 24 years Saudi citizen.

The knife will remain in his head

The Expatriate was brought into the hospital in time and the staff of the hospital treated him very well to save his life.

They did not pull the knife from his head as it could damage some nerves and cause the death of the expatriate. The expatriate is now out of danger but the knife is still in his head.

The Saudi man has been arrested

The Saudi man who stabbed the expat is arrested. Initial inquiries from the Saudi have confirmed that there was a dispute between the expatriate and Saudi.

Doctors are of the opinion that they will wait for the expatriate to be fully recovered before making any decision to pull the knife from his head. Pulling out the knife can be extremely dangerous as it may take his life.