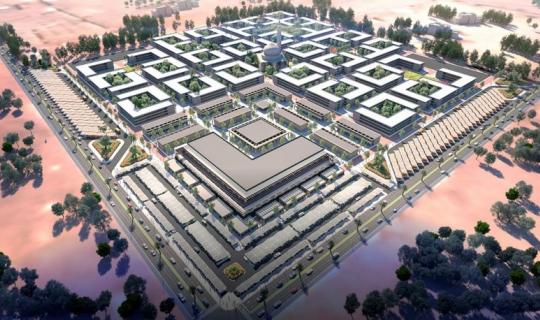 Jeddah- Contract awarded for construction of the city’s first complete Labor City.  Prince Khalid al-Faisal, adviser to King Salman, the servant of the shrines, was represented by Prince Mish’al bin Majid, an adviser to the governor of Jeddah, and Saud bin Abdullah bin Jalwi, the governor’s undersecretary of Makkah.

Namarik Al Arabiya Services has been awarded the contract to build the first complex in Jeddah to house foreign workers. The agreement was signed by representatives of Jeddah Municipality and Namarik Company. The governor of Jeddah said the idea for the implementation of such a project, which would benefit the city of Jeddah and foreign workers, was born out of the work done by the Jeddah Labor Housing Committee during the Corona era.  The Jeddah Governorate, the municipality and the relevant departments will jointly study the construction of another similar housing complex in the city center for foreign workers engaged in small business. The Jeddah Governorate is moving forward with the roadmap plan set out in Vision 2030 as per the recommendations of the authorities for sustainable development.

The new Labor City will be built on an area of ​​2.5 lakh square meters for foreign workers. More than 17,000 workers will be accommodated in the housing complex, which will be built to the conditions and standards that prevent the spread of the corona virus. Prince Mish’al bin Majid said the new housing complex project was the result of a detailed study of the living conditions of foreign workers in Jeddah and a feasibility study in collaboration with relevant departments on the implementation of such housing schemes.

Jeddah Mayor Saleh Al-Turki said the housing project was being implemented in full compliance with the standards and conditions. Ensure that sanitary conditions are implemented in the residences. The mayor said the Jeddah municipality would continue to implement similar investment projects in partnership with the private sector.

The Labor City, which will be built in the Abrukh Alrigama Baladia area, will have more than 75,000 packets of food prepared daily, fully equipped kitchens, dining halls, primary care clinics, mosques, entertainment centers, sports grounds, courts, ATMs, supermarkets and other outlets.  Solar energy will also be used here to find fifteen per cent of the electricity demand. Labor City will have low carbon emissions generators and wastewater treatment plants to protect the environment.