Sign in
Welcome! Log into your account
Forgot your password? Get help
Password recovery
Recover your password
A password will be e-mailed to you.
Life Of Arabs A complete guide for those who are living in Middle East or planning to come soon.
Advertisement
Home Middle East UAE: Indian and Pakistani ‘job seekers’ should refrain from travelling to Dubai... 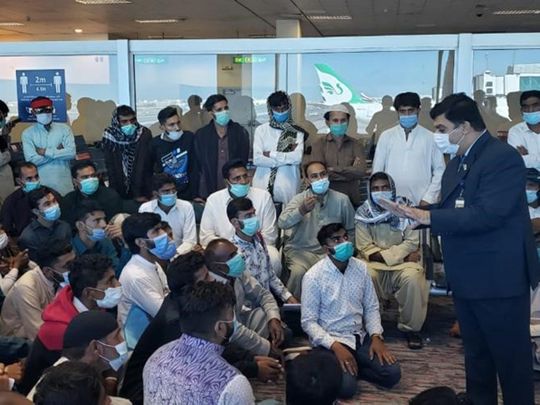 Dubai: Pakistanis and Indians have been warned against flying in to Dubai for job hunt on tourist/visit visas after hundreds ‘job seekers’ were denied entry at the airport for not meeting visa requirements.

Responding to the ongoing issue of passengers on tourist/visit visas getting stranded at Dubai International Airport, the Pakistani and Indian missions in Dubai have asked job seekers from their countries to refrain from coming to the UAE on these visas.

Denied entry According to the Pakistan Consulate, 1,374 passengers were denied entry in Dubai since Tuesday. “A total of 1,276 of them were sent back and 98 are remaining at the airport,” a consulate spokesperson told Gulf News on Tuesday afternoon. He said the remaining passengers would be flown back home in the next 12 hours.

Meanwhile, the Indian Consulate said around 300 Indian passengers had been stopped at the airport so far. “Around 80 were allowed entry later. Right now, 49 are still at the airport and we are trying to send them back by tonight or tomorrow. But there is a huge rush on flights,” a consulate spokesperson told Gulf News on Tuesday evening.

Stop job hunters from flying as tourists The Pakistan Consulate official said the mission has given informed the relevant authorities back home to stop ‘job seekers’ coming to Dubai on visit/tourist visas. “There are now two check points, at the check-in counters and at the immigration counters. If the officials suspect that a passenger on tourist visa is flying to Dubai seeking job, he will not be allowed to fly.”

The official confirmed that passengers are denied entry in Dubai if immigration officials are convinced that they have flown in to look for jobs. “The mission has also asked authorities back home to ensure that passengers on tourist visas have valid return ticket, hotel booking and show money,” the official said.

Genuine tourists Indian Consulate said the mission has also given instructions to ensure that only genuine tourists come on tourist visas. “If you are on a particular visa category, you have to satisfy that that you are a bona fide visa holder. No country will accept travellers without proper documents and those who do not fulfil the requirements

We have to respect the immigration authorities’ rules and nobody should travel from India to the UAE on a visit or tourist visa looking for a job.”

The official reiterated that Indian blue-collar workers should be recruited only through the e-Migrate online recruitment portal and employers and employees should follow all the regulations. “We request our fellow Indians to come on proper visas. If they are genuine tourists, they should possess sufficient means to cover their expenditure also. And if they are coming for a purpose other than tourism, we will request them to get the right visa.”

Deportation The missions stated that discussions with local authorities have been ongoing to resolve the crisis. They have also sought to expedite the deportation procedures for those who do not fulfil the entry requirements. Why this trend now?

Both local authorities and diplomatic missions of labour-sending countries have been discouraging people from travelling on tourist/visit visas for job hunt.

Though the trend of jobseekers coming to the UAE on visit or tourist visits had seen a lull in the initial months after the flight services resumed following the suspension due to COVID-19, it has been picking up again as economies have opened, industry experts said.