Sign in
Welcome! Log into your account
Forgot your password? Get help
Password recovery
Recover your password
A password will be e-mailed to you.
Life Of Arabs A complete guide for those who are living in Middle East or planning to come soon.
Advertisement
Home Saudi Arabia General Information Saudi Arabia Launches Its First Local-made HSI32 Fast Interceptor Boat 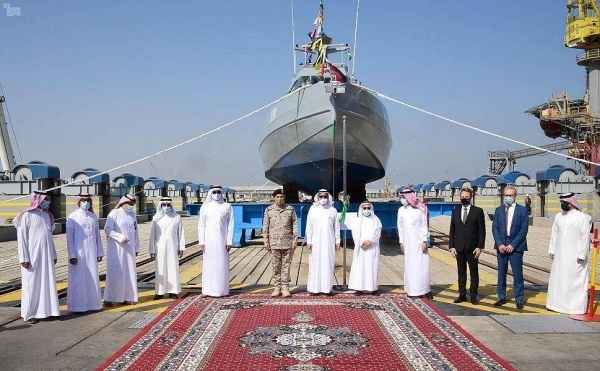 Saudi Arabia’s Ministry of Defense and the General Authority for Military Industries (GAMI) announced the launch and localization of the first locally-manufactured HSI32 speed interceptor boats as well as the commissioning of the first floating dock.

This comes as part of a plan to localize military industries in the Kingdom. As per the plan, boats will be manufactured locally according to the latest international specifications and standards in cooperation between the French CMN Group and Zamil Offshore Services Company.

Speaking on the occasion, GAMI chief Ahmed Al-Ohali commended the unlimited support and care of the wise leadership toward the promising sector. He pointed out that the manufacturing and localization of HSI32 system is part of the authority’s efforts to support and empower local manufacturers and develop promising local companies to be market leaders.

He added that the speedboats system will contribute to raising the level of military and security readiness of the Royal Saudi Navy Forces and also will contribute to strengthening the maritime security force in the region and protecting the vital and strategic interests of the Kingdom.

For his part, the Commander of the Royal Saudi Navy Forces, Admiral Fahd Al-Ghufaili, said that the localization of the speed interceptor boat systems is an actual and realistic embodiment of the Kingdom’s Vision 2030.

He added this agreement is part of a national project aimed at developing the industries and that the project was completed thanks to the efforts of GAMI and its pioneering role in building a sustainable local military industry.

Admiral Al-Ghufili extended his thanks and appreciation to Custodian of the Two Holy Mosques King Salman and Crown Prince Muhammad Bin Salman as well as to Deputy Defense Minister Prince Khalid Bin Salman for their unlimited support to develop the armed forces for the benefit of the nation.