Sign in
Welcome! Log into your account
Forgot your password? Get help
Password recovery
Recover your password
A password will be e-mailed to you.
Life Of Arabs A complete guide for those who are living in Middle East or planning to come soon.
Advertisement
Home Saudi Arabia General Information 250,000 Domestic Pilgrims Will Be Allowed To Perform Umrah In The Second... 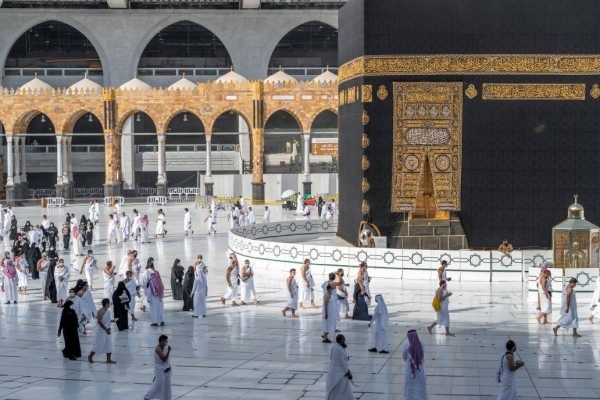 As many as 250,000 domestic pilgrims will be allowed to perform Umrah in the second phase as part of the gradual resumption of the pilgrimage and visits to the Two Holy Mosques from Sunday (Oct. 18).

Hani Al-Omairi, a member of the National Committee for Hajj and Umrah, told Okaz/Saudi Gazette that more than 600,000 worshipers will be granted permits to perform prayers at the Grand Mosque along with over 250,000 Umrah pilgrims during the second phase of the gradual resumption of Umrah service and visit to the Two Holy Mosques. Worshipers need to register through the Eatmarna App to obtain permits to perform Umrah as well as to visit the Grand Mosque and Rawdah Sharif.

Foreign pilgrims will be allowed to perform Umrah and visit the Rawdah from Nov. 1, which marks the beginning of the third phase of the gradual lifting of the temporary suspension of the service.

Al-Omairi, who is also a member of the Saudi Society for Travel and Tourism, said that it is not clear now how many countries will be allowed to send their pilgrims for Umrah due to the spread of the coronavirus pandemic in those countries. “All are expecting that the authorities would soon announce details of the countries from where pilgrims can come to perform Umrah effective from the third phase of the resumption of Umrah service,” he said.

Al-Omairi noted that a mechanism has been worked out under which buses will be allowed to operate at not more than 40 percent of the capacity. Similarly, only two Umrah pilgrims will be allowed to reside in a single room and that is in total compliance with the precautionary measures against coronavirus.

The Ministry of Hajj and Umrah, in cooperation with the concerned authorities, received the first batch of Umrah performers, including citizens and expatriates on Oct. 4.

According to the strategic plan developed by the government agencies, the first phase of resuming Umrah witnessed small numbers that do not exceed 6,000 Umrah performers per day, and each batch is being allocated only three hours to complete Umrah rituals, allowing the application of this plan amid high-level precautionary measures.

As part of these measures, the Grand Mosque is being sterilized 10 times every day. There is sterilization before the entry and after the exit of each batch of pilgrims. The Zamzam water is being distributed to the pilgrims in packaged bottles.

The pilgrims are barred from approaching the Holy Kaaba and the Black Stone (Hajar Al-Aswad). The Tawaf (circumambulation around the Kaaba) is being performed outside the temporary barrier installed around the Kaaba in the mataf. Specialized medical teams are readied to serve the pilgrims. There are areas set aside for medical isolation in the event of any suspected coronavirus cases among the pilgrims.