Sign in
Welcome! Log into your account
Forgot your password? Get help
Password recovery
Recover your password
A password will be e-mailed to you.
Life Of Arabs A complete guide for those who are living in Middle East or planning to come soon.
Advertisement
Home Saudi Arabia General Information Makkah police arrest the father who beat his daughter. He tied her... 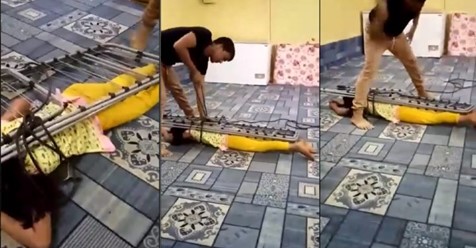 Last week a disturbing video surfaced on the internet where a father was seen beating his 5-years-old daughter. He tied her up with a rope and started lashing on her sensitive parts while she was screaming “Baba, I am your daughter Baba”.

In addition to abusing his own daughter, the man filmed the incident and posted it on social media.

The video showed the rude father tied his small daughter who seems to be not more than 5 years old and hit her feet and body cruelly with some strap-like thing.

The daughter cries and shouts with the pain but it has zero effect on the harsh father. The other child is seen threatened by the incident, sitting in one corner of the same room.

Makkah police have arrested the father

The spokesperson of Makkah Police has said that they have identified the man and arrested him. The man is in his 40. He was a resident of Makkah and arrested for shackling his daughter, beating her, filming the offense, and posting it on social media.

The man is now in police custody and all the measures are taken to move his file to public prosecution for trial.

LifeOfArabs - June 28, 2022 0
Sadly, an 8-year-old Kuwaiti girl who had been married off in Yemen has passed away from internal injuries she sustained on her wedding night. How...