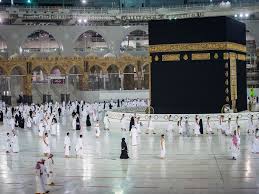 Saudi authorities have announced on Wednesday that no coronavirus infections were reported among Umrah pilgrims.

A spokesman for the General Presidency for the affairs of the Mecca Grand Mosque and the Madinah Prophet’s Mosque said that its plan for resuming the pilgrimage focused on four main elements: Prevention, disinfection, sending out the pilgrims and awareness.

“We cooperated with the Health Ministry in preparing four health isolation centers for any pilgrim who shows any symptoms of the virus or who is suspected of contracting it,” he added.

“On the fourth day of the pilgrimage, we received some 24,000 worshippers, none of whom showed symptoms of the virus,” he said, praising the pilgrims for respecting preventive measures.

The Umrah resumed on Sunday after months-long suspension due to the pandemic.

Saudi Arabia has allowed citizens and residents to start performing Umrah at 30 per cent capacity, or 6,000 pilgrims a day.

It will gradually increase the number of pilgrims and open for Muslims from abroad starting November 1.