Sign in
Welcome! Log into your account
Forgot your password? Get help
Password recovery
Recover your password
A password will be e-mailed to you.
Life Of Arabs A complete guide for those who are living in Middle East or planning to come soon.
Advertisement
Home Saudi Arabia General Information Minister Benten: MoH to decide on countries allowed for Umrah 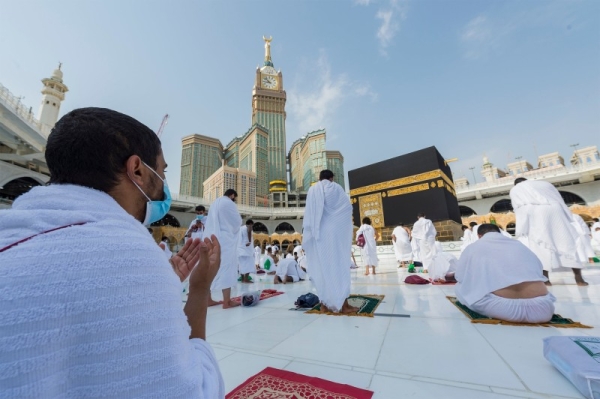 RIYADH — Saudi Arabia’s Minister of Hajj and Umrah Muhammad Saleh Benten announced on Sunday that the Ministry of Health would take a decision on which countries will be allowed to send their pilgrims to perform Umrah.

The minister’s announcement follows an earlier statement by the Ministry of Interior saying that the Kingdom would allow foreign Umrah performers to enter the Kingdom in the third phase of the gradual resumption of the suspended Umrah service effective from Nov. 1.  In a television interview with Al-Ekhbariya channel, Benten said that there would be a special electronic path for the arrival and departure of foreign Hajj pilgrims for next year’s Hajj. Referring to the resumption of Umrah service for domestic pilgrims effective from Oct. 4, the minister said that only 12 groups of pilgrims would be allowed to perform Umrah within 24 hours in the first phase.  “The pilgrims will be divided into groups and each group will be accompanied by a health professional at the Haram. Only pilgrims with ages ranging between 18 and 65 years will be allowed in the first phase,” he said.

Benten revealed that there is no fee for issuance of Umrah permit. “No Umrah pilgrims will be allowed to enter the Grand Mosque in Makkah without completing the entry procedures through the mobile app “I’tamarana” and this is to ensure the health and safety of pilgrims,” he said, adding that alternative arrangement will be made if there is any technical snag for completing the procedures through the app.

Domestic pilgrims can register now for Umrah  Saudi citizens and expatriates as well as their families in the Kingdom are allowed to download the Umrah mobile application titled “I’tamarna,” effective from Sunday to register their names to perform Umrah pilgrimage as well as to visit and worship at the Two Holy Mosques.  The application is now available for users of iOS and Android operating systems on their smartphones seven days before the start of the first phase of the pilgrimage. The Ministry of Interior announced earlier the gradual resumption of Umrah and visits to the Two Holy Mosques with a limited number of pilgrims, starting from Oct. 4.  In the first phase, citizens and expatriates from within the Kingdom will be allowed to perform Umrah at a capacity of 30 percent from Oct. 4 that translates to 6,000 pilgrims per day and that is in compliance with the health precautionary measures of the Grand Mosque.

The pilgrims will be allowed to perform the ritual in 12 groups, each consisting of 500 pilgrims in a day.  The registration of the data entered by the pilgrims and visitors to the Two Holy Mosques will be directly related to the application “Tawakkalna,” the official app launched by the Ministry of Health to prevent the spread of coronavirus. This step would consist of a number of procedures, including providing a guarantee that the pilgrim or visitor is free from coronavirus, the Ministry of Hajj said.  The app will enable the pilgrims and visitors to plan their pilgrimage and visit in advance, as well as to make reservation of optional services to perform their rituals in ease and comfort, in addition to ensuring the compliance of the health and precautionary measures and preventive protocols, approved by the Ministry of Health and other competent authorities, to stem the spread of coronavirus.  The Ministry of Hajj has developed the app in cooperation with the Saudi Data and Artificial Intelligence Authority (SDAIA) to regulate the times of rituals of those wishing to visit Makkah and Madinah to perform Umrah and pray at the Two Holy Mosques.

Meanwhile, stores for Ihram clothing resumed business after a long interval of more than six months in Saudi Arabia prior to the partial resumption of the Umrah season from next Sunday. Ihram is one of the three pillars of Umrah, and it means entering the sacred state, during which certain things are prohibited. Men must wear two pieces of unstitched sheet of white cloth while women can wear their ordinary clothes.