Sign in
Welcome! Log into your account
Forgot your password? Get help
Password recovery
Recover your password
A password will be e-mailed to you.
Life Of Arabs A complete guide for those who are living in Middle East or planning to come soon.
Advertisement
Home Saudi Arabia General Information Saudi: Huge fire in Taif’s Amad Mountain continues to blaze 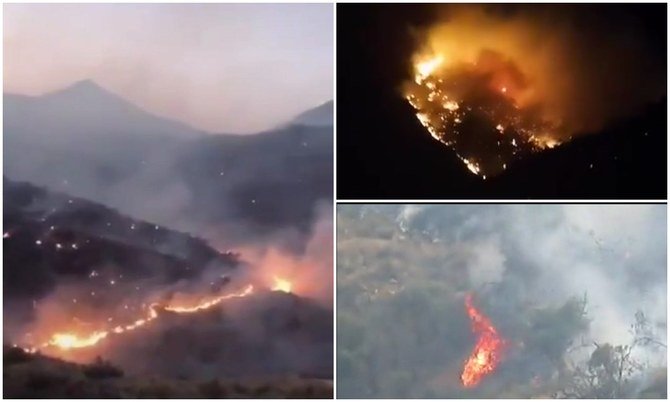 Saudi Civil Defense teams continue to tackle a fire on Amad Mountain in South Taif.  The fire broke out early Wednesday morning and spread rapidly due to strong winds and the number of trees in the area. No casualties have so far been reported.

The operations to put out and control the fire are still ongoing, and there are no injuries,” the Civil Defense said in a statement. “The fire is under control and decreasing”, a media spokesperson said

One eyewitness, Bandar Al-Thaqafi, said the fire had spread widely — clearly assisted by the wind — and covered an area of approximately one square kilometer. “The dense trees that were greatly affected by August’s heat had a significant impact on the fire’s expansion,” he added.  Amad Mountain rises more than 2,000 feet above sea level and is famous for its juniper trees. It is home to large numbers of livestock. The area is also known for other tourist attractions, including Hathwa’ parks and Al-Barda.