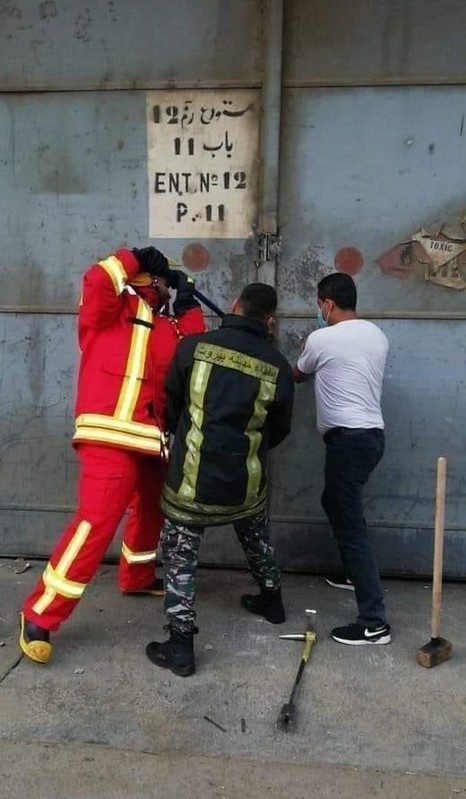 Beirut blast is the worst disaster we have witnessed this year. It has killed hundreds and injured thousands. Thousands are left homeless and hopeless.  Here is the most terrifying picture of the Beirut blast that was taken just 12 minutes before the blast. The terrifying and the most painful picture of this year that can never be forgotten throughout history.  The picture is about three firefighters who were called when the fire broke out on the port of Beirut and the surrounding areas.

The three firefighters are desperately trying to open the door of the warehouse no 12. The warehouse no 12 contained 2750 tons of ammonia nitrate. The three firefighters were trying to stop the flame from spilling over the chemical to avoid a large explosion.  The picture of these three firefighters will always be remembered as they were the first to respond. They came among the team of 10 members who rushed on the site to control the flaming fire.  They responded to the call of the duty unknowingly that this is the last duty they are going to perform. The three men are still missing along with the photographer.  Source: Sabq

Kuwait” closes the land and sea border crossings, and prohibits the presence in restaurants from next Wednesday

Kuwaiti Health Minister: Corona will continue until Judgment Day … and this is the solution to confront it

Egyptian Woman beats the man who pinched her – 3 years Jail

Permits for Umrah and visit to Two Holy Mosques to be...