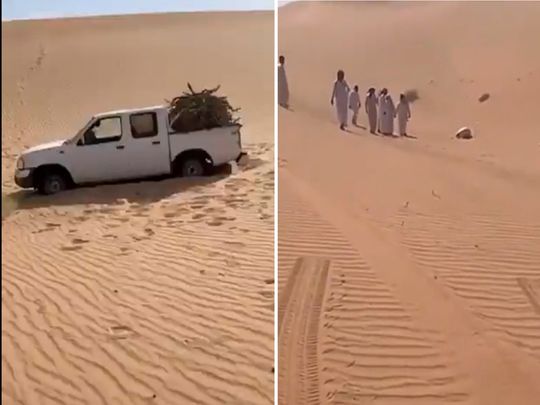 Dubai: A 40-year-old Saudi man, who went missing from his home in Wadi Al Dawasir in the Riyadh province, has been found dead while he was in sujood (prostration) prayer position, local media reported.  The body of Dhuwaihi Hamoud Al Ajaleen, who went missing on Thursday, was found in the middle of sand dunes in a desert on Sunday morning after three days of intensive search.

The man’s family filed a missing person report with the Wadi Al Dawasir police after losing contact with him. The rescue teams launched a wide-scale search to find Al Ajaleen, who was driving a pickup truck  The Ghawth search teams then intensified the search for Al Ajalin using four-wheel drive vehicles and gliders to expand the scope in the rough areas and sand dunes. Then, his body was found a few metres away from his vehicle.

The truck was loaded with sticks, in a sign that the deceased was gathering wood for his family when he went missing.  Prayers poured into social media platforms after the video of Al Ajaleen who died in Sujood went viral.

A young man fulfills his father’s wish and gives him a car similar to the one that the Crown Prince drove with the Emir...

A young man fulfills his father’s wish and gives him a...

Direct flights from India to Saudi Arabia may be launched soon,...

Municipal Affairs” sets the dates for applying controls on groceries and...