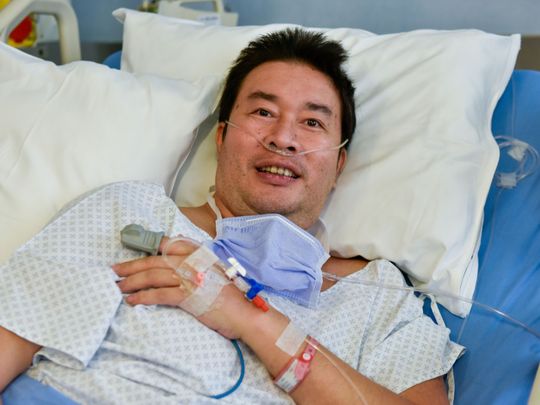 Dubai: Francis Naratefeliciano’s recovery from COVID-19 has been nothing short of a miracle. After having been in the Intensive Care Unit for over 72 days with 60 days on mechanical ventilation, going through near death four times, a stroke and horrific bed sores, the 46-year old Filipino expatriate has finally tested negative and is on the road to recovery.  Naratefeliciano, an executive in a multinational company, has no idea how he contracted COVID-19. A Taekwondo and Black Belt expert, he was already in respiratory distress when he rushed to the hospital.

Dr Hayder Matouk, consultant Intensivist and head of the ICU at Canadian Hospital Dubai, told Gulf News: “Francis’ case has been one of the most challenging for us. This patient came in a taxi on April 14, complaining of dry cough, fever and fatigue. He had been to two other hospitals a couple of days ago and had been treated and discharged. He had not been tested for COVID- 19. However, seeing his symptoms, we immediately took his nasal swab and even before the reports, started all COVID protocols, as he was showing classic symptoms.”

Initially, Naratefecliciano responded to treatment for a day, but by the next day, his oxygen saturation had fallen to 74. “The patient was very critical and breathless and the non-invasive oxygen support was not helping him. He had to be shifted to the ICU and on mechanical ventilation with an induced coma,” explained Dr Matouk.

For the next two months, Naratefeliciano swung between life and death, his condition worsened and had to be revived four times. “We almost gave up four times, but the patient persevered,” explained Dr Matouk, who had to conduct a tracheostomy to enable the patient to breathe. Another tube placed into his abdomen provided nutrition while the patient continued in this induced coma. There were a couple of occasions when Naratefeliciano tested negative and later relapsed into positive, said Dr Matouk.

Eventually he showed signs of improvement in the second week of June. However, the right side of his body was immobile. Despite all the blood thinners, the patient suffered a stroke as well and a brain CT confirmed blood clots. The COVID team included intensive physiotherapy in their schedule. The immobility resulted in horrific bed sores which were so deep that he had to undergo surgery to clean them out.  Permanent lung damage “His lungs have been permanently damaged, the coma and the severe form of the disease made him disoriented and lose his memory temporarily,” added Dr Matouk.  However, the hospital team that included Dr Noordin Wadhvaniya, specialist in respiratory medicine and physiotherapists, worked tirelessly to revive Naratefeliciano. Finally he was weaned off the mechanical ventilation on June 28. After having gone through sUCH trauma, Naratefeliciano might require several weeks of additional hospital stay to stablise and gain strength.

Grateful to be alive Speaking to Gulf News from his hospital bed Naratefelicano who hails from Batangas city in the Philippines said: “I thank God I survived this terrible ordeal and thank the hospital for not giving up on me and taking such good care. My wife Sheila Lisa moved to Edmonton, Canada and my only son, Franz Andres, 18, is studying in the Philippines. The hospital staff was my family for these three months. My wife was so worried but was reassured by the hospital. I was so sick that I have no memory of the months in between. I feel better now. I am able to talk with my family on video chat and am hoping to recover completely and look forward to meeting my wife and son soon.”

LifeOfArabs - June 19, 2022 0
After residing in Saudi Arabia for a while, you will eventually miss it and come to the conclusion that Saudi Arabia was the finest...