Sign in
Welcome! Log into your account
Forgot your password? Get help
Password recovery
Recover your password
A password will be e-mailed to you.
Life Of Arabs A complete guide for those who are living in Middle East or planning to come soon.
Advertisement
Home Saudi Arabia General Information Pakistani carpenter becomes model in Saudi Arabia after his photo goes viral 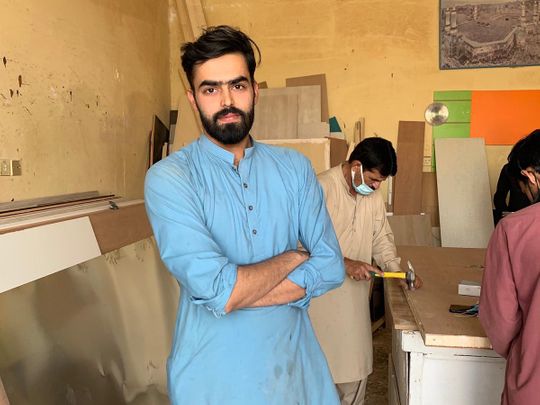 A viral post on Twitter has changed the life of a 24-year old Pakistani expatriate who was working as a carpenter in Saudi Arabia. Muhammad Waqas, who came to the kingdom four years ago, was always interested in becoming a model but he had little hope of succeeding.  “I came to Saudi Arabia four years ago to work as a carpenter and I never thought of becoming a model in advertising,” said Muhammad to local media channels.

However, a quick social media post from his friend changed his career.  “One day, I saw my friend Faisal editing a photo session. I told him I wanted to work in this field since childhood, but in Pakistan I didn’t get any opportunity, so my friend suggested and took a picture of me and sent it to the relevant person.,” he added.  A screenshot of Muhammad’s friend asking to get the youngster a chance in the modeling industry, went viral online.  In a tweet that has gained over 33,000 likes so far, user @tamimi1_1 asked agencies seeking models to contact him.  “Brands wanting to model this handsome man, please contact me” @tamimi1_1 wrote.  Muhammad was soon offered modeling opportunities.