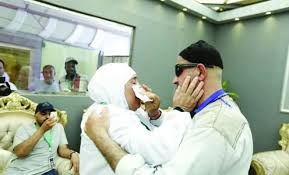 
Allah created humans and sent them into society among people whom he/she can call their father, mother, brother and sister. These relations are very important for each and every human being.  But imagine if you lost your brother/sister and think of him/her as dead and suddenly find them again unexpectedly at some point of life.

The situation will be very emotional and heart breaking but this happened few years ago and that too in Makkah.

Bushra was sitting in her tents at Mina when she noticed a man who looked like her brother Sameer who was long dead.  But her thought came into reality in moments when she found that he was her brother, her own brother in real blood and flesh, her brother who was presumed to be dead 15 years ago.

“I was shocked that my own brother who has been declared dead was sitting in front of my eyes, it was like ALLAH give him a second life our both of us” says Bushra.  The brother-sister duo is from Palestine and an incident 15 years ago separated them. The constant war and tension in the country made life problematic for people living there.

Sameer luckily fled the country between ongoing war and tension and settled at some distant country. When he didn’t return for long his family members inquired about him.  To their shock, the force told them that he was martyred in the war and is dead now. They didn’t give them his body too

His family members lost all the hope and immersed themselves in deep grief. They didn’t expect that one day their son will return and is living in some distant lands.  Bushra and Sameer lost their parents during this big gap of 15 years. Life changed for both of them when Bushra went for Hajj in 2017.

Bushra explains, “I was sitting idle in the tents of Mina and all of a sudden I was staring at a men, later I got a feeling that he is my brother who has been lost 15 years ago from our Palestine then I inquired about him and he told that he had a family once in Palestine when asking about his family”.  Sameer who didn’t recognize her sister till then told her that he lived in Palestine and had a sister named Bushra. Bushra who was listening all this burst into tears and told him that it is she, her sister.

It was amazing and best feeling for her, she wouldn’t have imagined that they will be reunited with the grace and blessings of the almighty Allah – most merciful.  She went for Hajj and Allah gifted her long lost brother back. These kinds of stories reminds us the supreme power of Allah. She hadn’t the slightest idea that she would find her brother.  “There is no might, no power except that it belongs to Allah.”

Note: This incident took place in the year of 2017. The purpose of the article is to show the miracle that takes place so rarely.