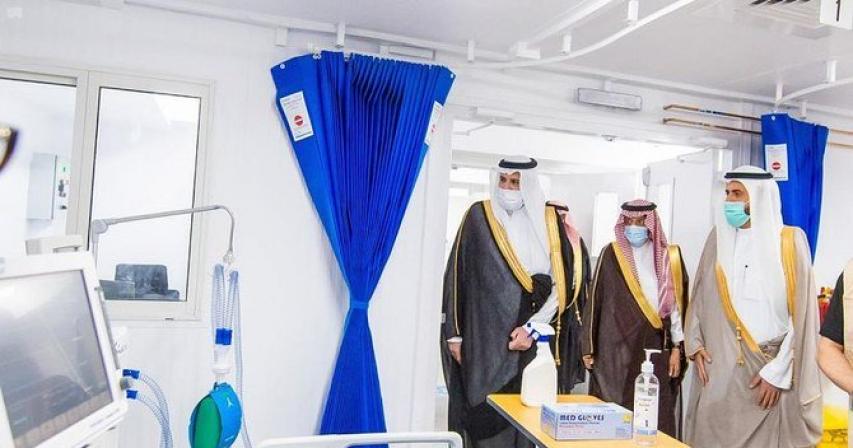 A new COVID-19 field hospital in Madinah has been named in honor of Saudi nurse Nujood Al-Khaibari. She died in June after contracting the novel coronavirus while working at a medical center in the city on the front line of the battle against the pandemic.

The Nujood Medical Center was officially opened by Madinah Gov. Prince Faisal bin Salman on Wednesday, in the presence of Minister of Health Dr. Tawfiq Al-Rabiah.  “This project is established in appreciation and recognition of the efforts of all workers in the health sector, who not only serve citizens, expatriates and visitors in this country, but they have also sacrificed their lives,” Prince Faisal said during the inauguration ceremony.  The hospital was built in partnership with ACWA Power company, and the governor thanked Energy Minister Prince Abdul Aziz bin Salman for supporting the project.  The hospital, which is dedicated to treating COVID-19 patients, was built in 59 days and has a capacity of 100 beds, Al-Rabiah said in a message posted on Twitter.  “This step is to acknowledge and express gratitude to health practitioners, and to commemorate the sacrifice of nurse Nujood Al-Khubeiri, who was the first nurse to die (in Saudi Arabia) as a result of infection with COVID-19,” he said.  Nujood’s husband, Turki Al-Khaibari, said he was proud but not surprised that his wife’s bravery and sacrifice had been recognized and honored by her country, and that the governor and the health minister have helped to mend his family’s broken hearts. Nujood devoted her life to helping her patients, not only during the pandemic but throughout her career, he added.  “Losing her has been painful,” he said. “She worked overtime every day, and after performing her duties she would distribute medicine to her elderly patients and persons with disabilities in their homes on a daily basis. She faithfully served her patients and was an example of patience and dedication to work.”  Nujood’s brother, Hussein Al-Khaibari, said she died in service of her country.

“She wasted no time in fighting this pandemic and was on the front line,” he said. “She was known throughout her life for her competence, honesty and devotion to her work. She vowed to serve this great country.”  Nujood, who was from Madinah and had three daughters and one son, was 45 years old when she died. She had worked in the health sector for 18 years, and was based at Ohud Hospital.  Moayad Abu Unq, a spokesman for Madinah Health Affairs, said that the decision to honor the nurse by naming a medical facility after her is part of an initiative by the governor to show appreciation for the efforts of health-sector workers in the region.  “This positively reflects on the performance of health practitioners and their dedication to their work as front-line heroes and healthcare providers fighting the pandemic and other diseases,” he said.

Nujood invested a lot of time and effort during her career serving patients at health centers in the city, he added.  “Our message to health practitioners is that our duty toward our country is a great and difficult one,” said Abu Unq. “We must all join hands and do everything we can to give our country what it deserves through our dedication and tireless efforts.”  Dr. Ahmad Aboshaiqah, a professor, nursing consultant and board member of the Saudi Nurses Association, said: “This initiative reflects the status of the nursing profession and its members’ dedication to serve every patient.”  He added that the selfless actions of nurses show that the profession is one of the greatest and most honorable careers, requiring high levels of skill, knowledge and ability.

“It has become clear how these heroes have dealt with this pandemic, as nursing is the laboratory of change in any medical facility, and they are the leaders and knights of the field,” said Aboshaiqah.  The new, 15,000-square-meter field hospital includes 20 intensive-care beds and an 80-bed general admissions facility, with 40 ventilators and 100 oxygen-supply devices. It also has its own laboratory for tests and research, pharmaceutical services and diagnostic services.  On Thursday, Saudi Arabia reported 41 additional COVID-19-related deaths, which brings the total to 2,100. A further 3,183 cases of infection have been confirmed, which means 223,327 people have tested positive for the disease. Of these, 60,131 cases remain active, and 2,225 patients are in a critical condition.

The Ministry of Health said 364 of the new cases are in Riyadh, 247 in Dammam and 246 in Jeddah. An additional 3,046 patients have recovered from COVID-19, bringing the total number of recoveries in the country to 161,096.  “We are currently going through a phase of stability and control of the COVID-19 curve in the Kingdom,” said Ministry of Health spokesman Mohammed Al-Abd Al-Aly. “This is due to the successful measures taken by authorities, and public awareness, and we should maintain this level of commitment.”

He also highlighted the fact that 72.1 percent of COVID-19 patients have so far recovered. An additional 53,153 tests were carried out in the past 24 hours, bringing the total number in the country to 2,124,976.